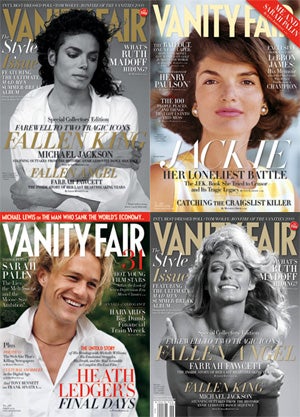 This month the magazine published its third consecutive issue (fourth, if you count September’s Michael Jackson/Farrah Fawcett double issue) featuring a dead person on its cover.

This time, it’s Jackie Kennedy, illustrating a cover story about William Manchester’s 1967 book, “The Death of a President,” and the subsequent tussle over its publication.

Put another way, that’s as many dead people on Vanity Fair’s covers in three months as the magazine has exhumed in the last three years. (The last dead celebrity was Marilyn Monroe in October 2008.)

For those of you scoring at home, that’s technically four Kennedy covers since 2006, two more than Gisele, Barack Obama, Julia Roberts, Amy Adams, Tina Fey, George Clooney and Shia LaBeouf, each of whom have appeared on two.

And even when Vanity Fair doesn’t put a Kennedy on its cover – such as its September 2008 issue featuring Carla Bruni – editor Graydon Carter still can’t resist a Kennedy cover line (“Carla Bruni: The New Jackie O?”).

If you needed more proof of Vanity Fair’s Kennedy fetish, the magazine now has a page of its website dedicated to the “Kennedys: An American Dynasty.” And no one would be surprised to see Ted Kennedy turn up on a Vanity Fair cover this fall.

Perhaps the dead will breathe new life (sorry) into Vanity Fair’s sagging newsstand performance. Single copy sales of the magazine fell more than 11 percent during the first half of the year, according to the Audit Bureau of Circulations – a figure that was actually better than the industry average of 12 percent.

There is some evidence this grim tactic might work. In 2008, the Monroe and Kennedy issues sold about 470,000 and 440,000 single copies, respectively, making them the second and third bestsellers for Vanity Fair that year (only July 2008’s busty Angelina issue sold more). In 2007, the Kennedy "Camelot" cover sold 465,000 copies, just 20,000 copies fewer than that year’s #1 – July’s Bono-edited Africa issue, featuring Barack Obama as one of its 20 Annie Leibowitz-shot covers.

And, of course, there’s the wacko Jacko collectors, who have already helped generate some $55 million in incremental revenue for magazine publishers in the wake of the King of Pop’s death.