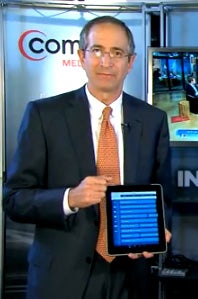 Under normal circumstances, it would have been relatively big news – a Condé Nast tentpole moving forward in terms of digital innovation. (The app, like its GQ version which rolled out April 4, allows users to “download the entire magazine: every story, every photo, every page” and extra stuff for $4.99.)

Except any buzz the announcement might have generated was quickly contained, as Comcast, the nation’s largest cable company and likely future owner of NBC Universal, unveiled its own iPad application – one that appears to be legitimately innovative.

Comcast chief Brian Roberts demoed the “Xfinity Remote” app for the iPad at the Cable Show in Los Angeles, and it was met with several “Wow!”s from those who saw it.

PaidContent’s Stacy Kramer, for one, said this:

Out of all the possibilities for consumers at The Cable Show going on now in LA, this one from Comcast has the potential to enhance the viewing experience in a way I haven’t seen since the Slingbox. That’s because it comes the closest to cracking the code for a wireless multimedia remote/program guide without requiring install backflips, workarounds or compromises. It includes — or promises to include — the kind of info access we expect from a PC or handset but developed for a form factor designed to be as much a TV companion as an alternative screen.

Kind of makes Condé’s “every story, every photo, every page” pale in comparison.

Watch the demos of both here: