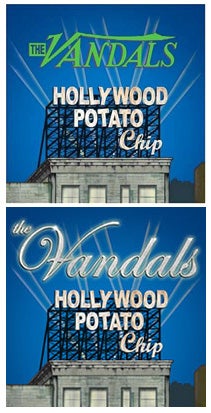 Variety is suing a venerable California punk rock band over the unauthorized use of its logo. Again.

According to the latest suit, filed in Delaware District Court on March 24, the band — the Vandals – and its record label – Kung Fu Records — violated an agreement stemming from a complaint Variety registered in 2004 over the design of the Vandals’ “Hollywood Potato Chip” album cover.

Shortly after its 2004 release, Daily Variety hit Kung Fu Records with a cease-and-desist letter over the cover (right, top). The band and label complied, agreeing to redesign the cover (right, below) without the mimicked Variety logo on future pressings of the album.

According to the suit, lawyers for Variety owner Reed Elsevier argue that copies of the original cover — and a sampler that uses the Variety logo — remain online on Web sites the label and the band operate.

The band claims they are no longer using the logo anywhere, and that the sites named are not under their control.

“Variety claims that our old logo for 'Hollywood Potato Chip,' which is a parody of the Daily Variety logo commenting on the materialistic culture of Hollywood, is still on the Internet and they are suing us for this,” The Vandals said in a note posted on their website. “We agreed not to use this logo anymore and we have no product for sale with this logo so their claims that we are intentionally using it and harming the Daily Variety are ludicrous.”

“We do not have this logo, or any other of their logos on any of our sites under our control,” the Vandals' note continues. “They are telling us that it is still on the Internet but they wont tell us where it is. Instead, they have demanded a HUGE sum of money. I mean HUGE, OUTRAGEOUS, and IMPOSSIBLE TO RAISE; and $25,000 for their attorneys to cover all the damages they have suffered from what they call a breach of our settlement agreement.

“We have breached nothing. We are just a punk band and a small insolvent record label trying to keep stuff on the shelves and pay royalties to other artists.”

"The stylized VARIETY mark is a very well known and valuable trademark which the Vandals misused," Henry Horbaczewski, counsel for Reed Elsevier, wrote in an e-mail message to TheWrap. "We sued them, and they accepted a settlement agreement in which they promised to stop misusing our mark, because we wanted to stop the misuse, not their money. They then ignored their agreement."

Horbaczewski added: "[Vandals bassist Joe] Escalante is a lawyer. He should have known the consequences of his actions."