What does the future of media look like? A panel of warriors battling on the front-lines of the shrinking territory of 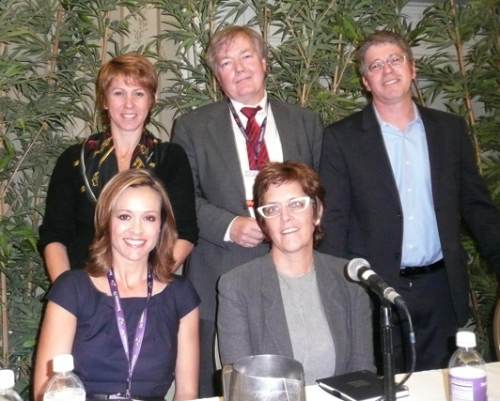 Quality Media talked about what is happening today at Digital Hollywood.

It isn’t pretty, especially this week. The L.A. Times has quietly laid off veterans Tina Daunt, Susan Spano and Diane Haithman, with a dozen others to follow. The New York Times announced its plans to lay off 100 people before the end of the year. (Read Mikulan on the L.A. Times.) BusinessWeek got sold for a handful of shiny pebbles, and Conde Nast is closing titles, while cutting staff at remaining publications.

So we are all desperate to figure out where this is all headed, what the correct business model may be.

Here at TheWrap we have our belief that becoming an essential read to a niche, high-value audience is the future. (Photo: me, Heikes, Frutkin, Anita Vogel and Hofmeister.)

Alan Frutkin, who produces video for Nielsen’s digital platforms, offered up video as a way of finding revenue. He said the Reporter, which is now functioning with a skeletal reporting staff and has very few ads in its print edition, has been seeking out video content on red carpets and at table reads of TV shows. “We don’t believe we’re reinventing the wheel,” he said, “but the moving image is a complement to the written word.”

Drex Heikes, the new editor of the L.A. Weekly, said this period reminded him of the first half of the 20th century, when there was an explosion of metropolitan dailies, an oversupply that got whittled down over the decades.

Interestingly – since he let go one of the best writers there, Steven Mikulan, who is now anchoring the L.A. Noir blog at TheWrap – Heikes said the Weekly was moving decisively into covering … food.

“By the end of the year we’ll have more coverage of food than the L.A. Times,” he said.

Sallie Hofmeister, who now oversees all the business entertainment and “Calendar” coverage, said Heikes was mistaken when he said there’d be 50 layoffs at the Times. But she did not say how many would be eliminated.

“The gateway to survival is Jon and Kate, Balloon Boy and Glenn Beck,” she said, with no great enthusiasm. But Hofmeister said the paper was committed to fostering its ties in the entertainment community, and beefing up that coverage. That’s because the ad revenue lies here, you can believe that.

I confess I was very curious to hear what Neil Stiles, the president and publisher of Variety Group, had to say. For close to a year the trade, which has been around for some 75 104 years (Update: Variety was founded in 1905), has been cutting and cutting editors and reporters – some of whom now work at TheWrap.

But other than improving the p&l, it’s not been clear to me what Stiles’ strategy is to turn around the fortunes of the once-flush trade. Like its competitor the Reporter, Variety has very few ads in its pages.

It turns out that Stiles no longer believes that journalism, and content, is the way forward.

“I wonder whether content is the king it once was,” he said. “And if content isn’t king, what is?” Service, he said, and the customer is king.

I found that a decidedly odd statement for someone in the content business. And even odder for a publication that has announced its intention to put its content back behind a paywall – my understanding is that will happen around February. Stiles quickly tried to backtrack when he was asked about this by Anne Thompson, a former Variety reporter. “Journalism is not dead,” he said. “But how do we pay for it?”

The trade faces the same conundrum as other print publications moving to online, Stiles said. That is that the rising traffic online cannot be monetized sufficiently, since the relative price of advertising online – cpms – is going down.

And then he dropped this bombshell: “I’m not optimistic about supporting the habit we call journalism.”

Wow. The Variety publisher does not believe that his business can support the journalistic “habit.”

Well, I disagree, and strongly. I have long criticized the trades for practicing badly diluted journalism, for rewriting press releases and calling that news, for being complicit with the subjects of their coverage and being afraid to break news.

But forget all that. Here we have a public statement by the publisher that journalism is not his business. Indeed, Stiles said he spends a lot of time trying to figure out, as he put it, “What business are we in?”

At TheWrap, we are most definitely in the content business. Smart, accurate, essential business news, authoritative reporting accompanied by deep analysis, delivered on every platform that the reader desires – that’s the future of our business.

And we’ll continue to do journalism, even if Variety chooses not to.