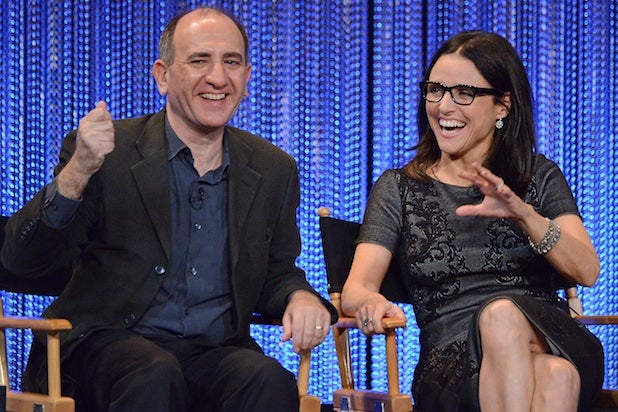 “Veep” creator Armando Iannucci revealed some of the secrets behind the world of his HBO comedy during Thursday’s PaleyFest panel at L.A.’s Dolby Theater.

The audience was treated to a preview of Season 3, which will take Selina Meyer (Julia Louis-Dreyfus) out of the D.C. bubble as she campaigns for the presidency.

“She’s running now, so she’s out and about,” Iannucci said. “We did two seasons where it was all about D.C. and the D.C. in-crowd and this is about her meeting the ‘normals’ as she calls them. Real America!”

He continued, “So, she goes to Silicon Valley, Detroit and Ohio and she goes to London. I think it’s all about taking all the characters out of their comfort zone.”

Iannucci revealed that the show gets a lot of requests from politicians to make cameos on the comedy — he wouldn’t name names. But, he says that those kind of cameos won’t happen for a couple reasons.

First, it would mess with the world of “Veep.” “It’s set in this parallel universe,” the creator said.

“If a living politician, a recognizable politician, turned up, you then say, ‘Well, he’s a democrat. So, is Obama the president?’ The whole thing starts unraveling,” he continued. “So, there’s a ban on politics in the show, actually.”

And second, the logistics rarely work out. “We’re moving at such a fast pace, it’s very difficult to plan in advance,” Iannucci explained.

“Politicians are very busy people. They have all these important decisions to defer. So, they’ll always say, ‘Well, we’re free between 11 and 11:05. We’d love to be in the background of a large kitchen scene.'”

“Well, that’s not going to happen,” he continued. “The way the scripts go, we might end up changing that or we may for some reason decide to junk that scene. And heaven forbid you have a politician hanging around for hours and hours with nothing to do.”

Then, Timothy Simmons, who plays West Wing lacky Jonah, pointed out another reason why having politicians on would make things awkward.

“Politicians who watch the show and want to be on think the show’s not about them,” he said. “We’re definitely making fun of them.”

The cast and producers also discussed who should play the president, whom viewers have yet to meet.

When asked whom he’d like to cast in the role of POTUS, Iannucci said without missing a beat, “Definitely Schwarzenegger.”

When it was pointed out that Arnold Schwarzenegger couldn’t be the president because he wasn’t born in the United States, the executive producer replied, “He’s an actor.”

Also read: ‘Veep’ Writer/Director: Not All Politicians Are Evil – a Good 1% Are Not

Though, fans shouldn’t hold their breath waiting to meet the POTUS. “I like the image that you build up about [the president] by just hearing about him,” Iannucci explained.