DNCE’s “Cake by the Ocean” will take on new meaning later this month as Steve Aoki joins the Hakkasan group in saying “Vamos a la playa!”

While Tiësto, Martin Garrix, Kaskade, Illenium and Armin van Buuren are among the names that have made Omnia a temple of EDM in Vegas, the new outpost south of the border will be less bombastic by servicing daylife and dining, not the post-midnight peak hours.

This venue and three others opening simultaneously at the Vidanta Los Cabos hotel will play in the key of “afternoon siesta” … that is, after the opening days. 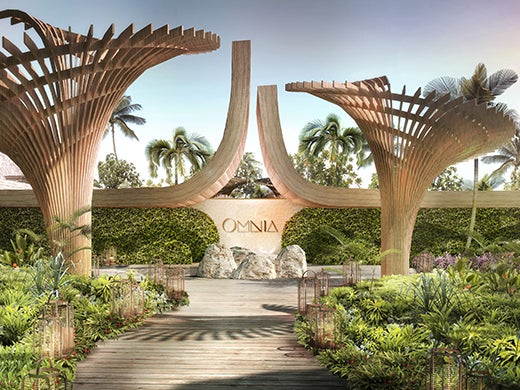 A rendering of the new Omnia Dayclub. (Hakkasan Group)

Calvin Harris, Zedd and Aoki will each play a headlining set to christen the new venues during a splashy grand opening weekend on Feb. 23-25.

“Our aim was to offer a day-to-night experience that would be world-class in its design, content and service,” Nick McCabe, CEO of Hakkasan Group, told The Party Report. “Los Cabos is a wonderful destination and we hope that these exciting new openings will give people yet another reason to visit.” 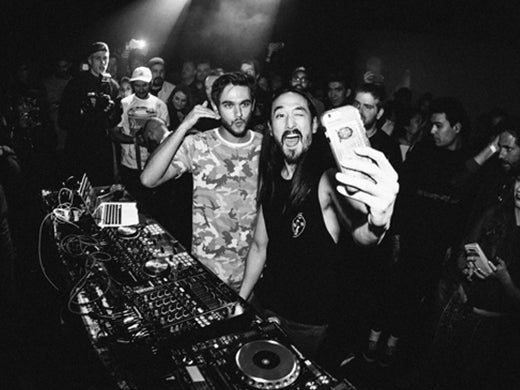 Buddies Zedd and Aoki at a private performance in L.A. (Neil Favila)

The district  will include the fish-focused Herringbone (a boozy brunch patio favorite at Aria in Vegas and in Santa Monica, California) and a south-of-the-border opening for SHOREbar (the “home away from home” that is one of L.A.’s only sleek cocktail haunts at the beach). 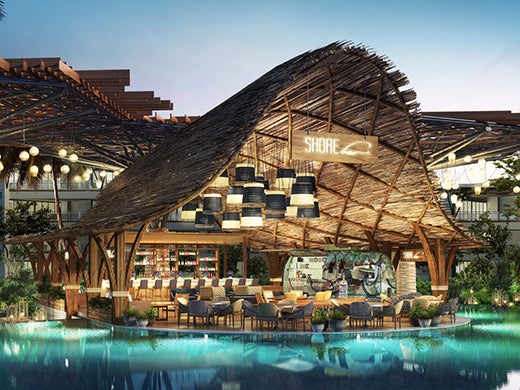 h.wood group’s relationship with Hakkasan, which includes the “Heart of Omnia” in Vegas, expands here with a new iteration of the Shorebar (Rendering)

Hakkasan Group is also raising the degree of difficulty by launching a new Mexican concept — in Mexico. Casa Calavera has a “dia de los muertos” bassline running through its beachside dining. 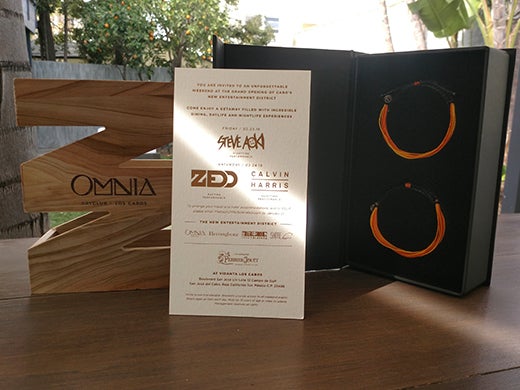 Nobody does hard invites for events anymore, except Hakkasan (Mikey Glazer)

Though Omnia is starting off with a bang, it’s not going to be a monstrous confetti cannon experience nor the cookie-cutter champagne sparkler template that peer properties like Nikki’s Beach have exported to every corner of the globe. Insiders tell The Party Report that they’re looking to import the Hakkasan DNA into a daylife concept.

From the looks of the renderings, it’s an intimate footprint. As a luxury play, this will also narrow the demographic crossover with Cabo’s neon-hued nightlife that caters to college-aged and young adult “bender-tourists.” For one, the Vidanta is a private, members-only property comprised of real estate owners. 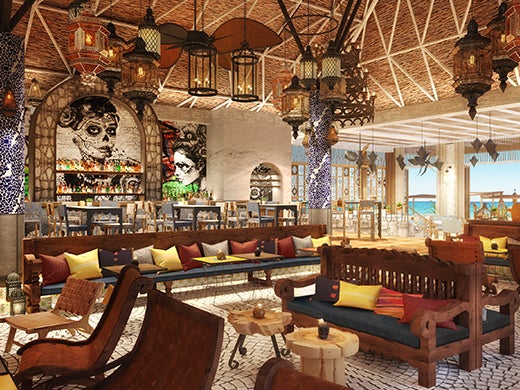 “It is incredibly exciting to be partnering with the leading name in lifestyle luxury to transform Los Cabos into the ultimate entertainment destination,” Iván Chávez, the executive vice president of Grupo Vidanta, told the Party Report. “Grupo Vidanta has long invested in establishing Mexico as a premier international tourist destination, and our new entertainment district exemplifies that commitment.”

Also Read: Surprise: Mexico-Based 'Coco' Is More Popular in China Than the U.S.

Unlike the Hakkasan’s Vegas pool scene at Wet Republic that takes a hiatus during the winter months, the Cabo entertainment district will be open year-round. Also, in a first for the devoutly code-compliant Hakkasan group, the venues will be 18-and-up  — something that is a no-go in Nevada.

“We are thrilled to be partnering with Grupo Vidanta to launch a new standard for entertainment experiences in Mexico,” McCabe added. The entertainment district is at the Vidanta Los Cabos. (Rendering)

Some of the familiar faces from Hakkasan’s VIP Services and management teams will be on the ground in Cabo as the venues ramp up. 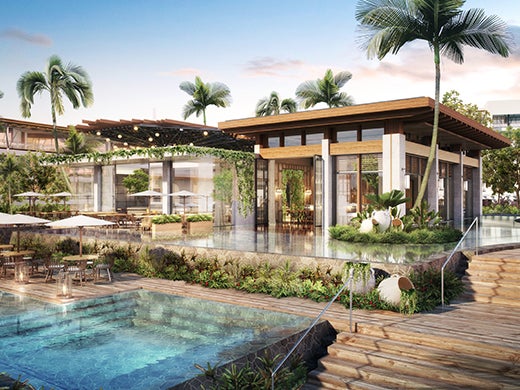 A view of the new Herringbone, which was formerly in the Mondrian in West Hollywood and is usually mobbed poolside at the Aria in Las Vegas. (Rendering)

This new international partnership is notable in the continuing story of Vegas’ revenue reliance on nightlife and hospitality revenue over casino gaming. While Las Vegas casinos have traditionally been a net importer of the most successful restaurant concepts from around the country, now homegrown Vegas winners are going the other way. Brands like Tao Group’s LAVO that opened in a hotel in Singapore over the New Year’s holiday and this portfolio from Hakkasan are setting a new trend: exporting Vegas DNA to other vacation markets.

Coinciding with Insomniac’s EDC Mexico festival in Mexico City, Cabo’s airport should be on the lookout for any private jets heading 735 miles north west to deliver this opening weekend lineup:

An early peek inside Omnia Los Cabos and some limited availability passes to the private opening weekend festivities are available here.

The first surreal one-off industry gathering of 2017 was not a party, but a protest: the Women's March at the Sundance Film Festival. In between that Saturday morning in Park City, Utah, and the year ending with a less-merry-than-usual awards season marching through the industry sexual assault reckoning, there were standout moments on the Hollywood party circuit. Here are eight of the best bashes, moments and debuts. Chris Martin Serenades Julia Roberts With "Pretty Woman"   Chris Martin singing Pretty Woman for Julia Roberts who was honoured at #amfARLosAngeles! | via @desireegruber #coldplay #chrismartin A post shared by Coldplaying (Official Account) (@coldplayinghq) on Oct 14, 2017 at 8:52am PDT At the L.A. amfAR Gala in October, this crazy rare performance of the Coldplay frontman serenading the movie star on the eve of her 50th birthday got lost in blowback over James Corden's Harvey Weinstein jokes. Separate from that controversy, the Tom Hanks, Goldie Hawn and Kate Hudson dinner party in Ron Burkle's Bel Air backyard hit all the right notes. As dessert, Fergie danced her way through the crowd while singing "I've Gotta Feeling," ruining all future wedding and bar mitzvah bandleaders' attempts at the same for the rest of our lives.

"Jane's" Hollywood Bowl Movie Premiere "Star Wars: The Last Jedi" wasn't the only film to get a super-sized rollout this year. In October, National Geographic and Brett Morgen leveled-up with a King Kong-sized outdoor seated dinner, premiere and live orchestra scoring the Jane Goodall documentary for over 15,000 guests.

John Mayer Plays An L.A. Dive Bar Jon Mayer played a dive bar in theÂ  Echo Park section of L.A. on July 26. (Rich Fury, Getty Images for Bud Light) There was a surprise within a surprise when Alessia Cara joined John Mayer's Bud Light Dive Bar Tour on July 26. They sang together an Erykah Badu cover, "Gravity" and Cara's "Stay" for just 300 fans, part of a full 90-minute set. The beer giant's muscular "underplay" went over big, with Lady Gaga beating this same path amidst the Super Bowl Halftime Show and stepping in as an emergency replacement headliner at Coachella.

The Block Is Hot in Hollywood TAO Group's Noah Tepperberg, Pavan Pardasani, and Jason Strauss and team celebrated the opening of their new entertainment block in Hollywood on Thursday, March 16. (Instagram (2)) The undisputed L.A. nightlife game change in 2017 was the arrival of the Tao Group complex in Hollywood. The three restaurants, Avenue nightclub and the mixed-use rooftop pool club and night lounge The Highlight Room enveloping the new Dream Hotel tilted the social axis. The New York and Vegas heavyweights waited over a decade before planting a flag in L.A., but when they did, their peers came to celebrate. On scene on opening night: David Grutman (Liv, Story, Komodo - Miami), Mark Birnbaum (Catch - LA and NYC), Rande Gerber, Cindy Crawford (Getty Images) The opening night party back in March was a stunning congress of hospitality rivals, competitors, big shots (present and long ago retired), festival titans, and at least a few former partners-turned-litigants, all responsible for captaining the U.S. nightlife industry over the past three decades. Of course, Leo D. was in the corner booth. Nobody will ever remember that one of the sneak peek pre-opening events was the (last-ever) Weinstein Company Oscar night viewing party.

Rapper Desiigner Pukes on a Table in Front of his Label Bosses, as Katy Perry Mocks PopÂ  Capitol CEO Steve Barnett, Katy Perry, and Universal Music Group CEO Lucian Grange at Grange's Grammy Weekend showcase at the Ace Theater in L.A. on February 11, 2017. (Lester Cohen/WireImage) This list is heavy on music, but those guys have the most fun. On the afternoon before the Grammys, Universal Music Group's four-hour-plus showcase at the Ace Hotel in downtown L.A. brought artists as varied as Machine Gun Kelly, Bishop Briggs, Niall Horan, Jordan Smith and Lil Yachty to the stage for an industry audience of label heads. Desiigner rose to the occasion (literally, standing on a cocktail table with his shirt off) by vomiting twice mid-song, and Katy Perry recalled her time working in a cubicle in Calabasas. Sir Lucian, this event needs a TV deal.

Genius Innovation: Shared Table Bottle ServiceÂ  The sharing economy of Lyft, Airbnb and urban Bike Share came to nightclub bottle service this year. Dubbed "V-I-We," it is the brainchild of longtime TAO executive Mike Snedegar. The Kentucky native launched it with a professional infomercial. (See above, he plays newsman Kent Brockman). Between 40-50 guests a night -- think of bachelorettes on a budget, couples and younger clientele -- get access to the VIP Skybox where Kim Kardashian has celebrated her birthday on the E! show for bottomless bottles at the Las Vegas hotspot for a $100 flat buy-in (plus tax and gratuity). Cocktail waitresses mix the drinks, presumably to keep the peace, and patrol the party pests known as "Grey Goosae Vulturus," latin for "bottle vultures." "It's a party within a party," Snedegar told The Party Report at launch. George Clooney, Rande Gerbe, and Mike Meldman's Casamigos Halloween on the Sunset Strip In June, the celebrity tequila buds sold their startup spirit in a deal reported to be worth up to $1 billion. This upped the volume on their '70s-themed Halloween party in the old Tower Records on Sunset. While George did not make it, Mrs. Amal Clooney stole the show, along with the Kardashian "Sonny and Cher" costume, and Adam Levine (center), whose band played a surprise set as AC/DC. Bonus: A 2018 Red Carpet Game Changer? A post shared by Polaroid (@polaroid) on Nov 20, 2017 at 6:28am PST There's now a device that snaps on to the back of your phone that will have you shaking your photos of Chris Martin, Kim Kardashian, Amal Clooney and more like a you-know-what. This Polaroid Insta-Share is a hardware mod for the Motorola's Moto Z phone. Other mods can turn phones in to 70-inch projectors and 360-degree cameras. This printer's won some "Best of the Best" awards among tech press, but hasn't yet dented the binary iPhone/Samsung mindset of the entertainment industry and event community as a red carpet novelty. Wake up people!