It’s no secret that Las Vegas knows how to party, but who knew hockey fans could be so wild?

The Vegas Golden Knights defied all odds — and their hometown bookies’ predictions — by making it to the Stanley Cup Finals in their inaugural season in the NHL, and boy were they gonna start the series off with a bang Monday night.

The opening game against the Washington Capitals, who were playing in the Finals for the first time in 20 years, had all the ingredients of a Vegas show with spectacular aerial performances, Grammy-winning singers and plenty of surprises.

The expansion Golden Knights are seeking to become the first NHL, MLB, NBA or NFL team to win a championship in its inaugural season — excluding the first year of a league’s existence — since the Cleveland Browns won the NFL Championship in 1950.

While the Stanley Cup Finals air live on NBC, TheWrap was at the T-Mobile Arena just blocks from the famous Las Vegas Strip to share everything you couldn’t see on TV.

Vegas is fired up!
Memorial Day Weekend in Las Vegas is usually all about crazy pool parties and drunken club nights, but thousands of fans opted for hockey jerseys over bathing suits on Monday afternoon as they headed into the cool, dark stadium out of the glaring desert sun. NHL commissioner Gary Bettman told reporters before the game that they chose this as an expansion city because “we thought being in Las Vegas would be good for hockey and strengthen the sport … Every benchmark along the way has been positive.” It seems the league made the right decision by gambling on Vegas. 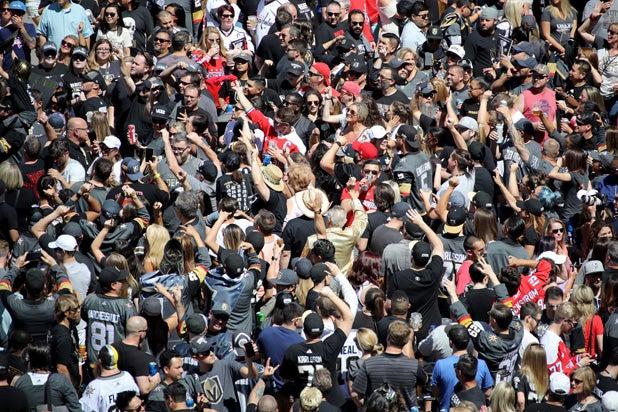 Lil Jon warms up the crowd
Grammy winner Lil Jon provided a free pregame show in the Toshiba Plaza outside T-Mobile Arena before the teams took to the ice. Wearing a Knights jersey, the rapper made no secret about who he was rooting for. He was later spotted inside the stadium hanging out with magician Criss Angel in the castle (yep, there really is a castle with a fortress … only in Vegas). 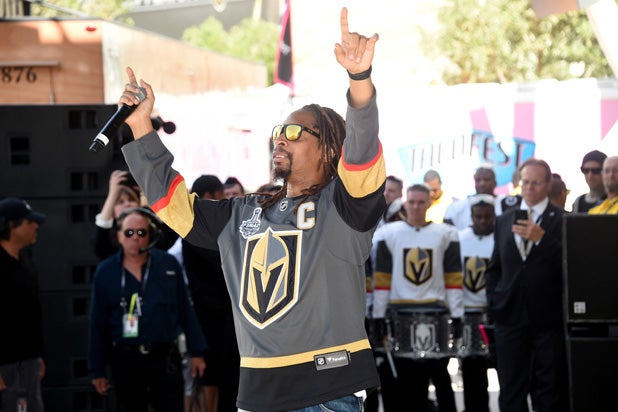 #VegasStrong
The Golden Knights held their inaugural home game just 10 days after the mass shooting last October at the Mandalay Bay hotel that left 58 people dead, and the team has since epitomized the mantra of Vegas Strong. The Knights held a tribute for the victims on Oct. 10 and then later in the season, the number 58 became the first number in team history to be retired. There were plenty of jerseys worn on Monday with “Vegas Strong” on the back where you’d normally see a player name, and Bettman credited the “emotional ties” to the attack as one of the reasons why the city bonded so quickly with the new team. 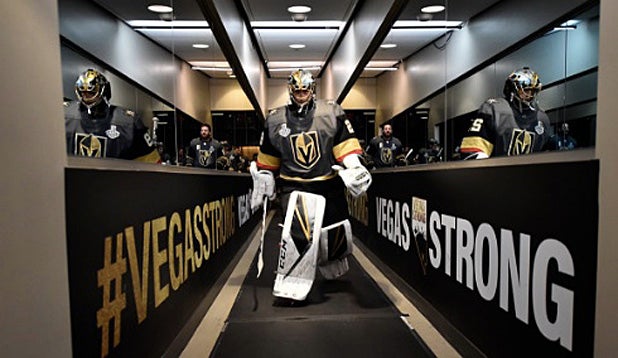 Mean Tweets: Vegas Golden Knights Edition
Before the puck dropped, fans were entertained by the Golden Knights own version of Jimmy Kimmel’s Mean Tweets on the Jumbotron. Mascot Chance the Gila Monster was the butt of most of the jokes, with one Twitter follower saying his head looks like a chopped mango.

With Kimmel being a Las Vegas native and a huge hockey fan, who also sent his own good luck video message to his hometown team, we’re pretty sure he didn’t mind them copying his signature segment.

“Game of Thrones” style entrance
The entertainment capital of the world pulled out all the stops for an opening spectacular that looked like a cross between “Game of Thrones” and Medieval Times. As the voiceover announced that “the West belongs to Vegas,” an epic battle took place on the ice between the Golden Knight himself and an evil Capitals swordsman who dropped in from the rafters Cirque du Soleil style. While no one can predict who will win the actual Stanley Cup Finals, the Golden Knight easily banished his foe in that standoff. The segment was so well orchestrated, we expected a dragon to fly in and set the stadium on fire. 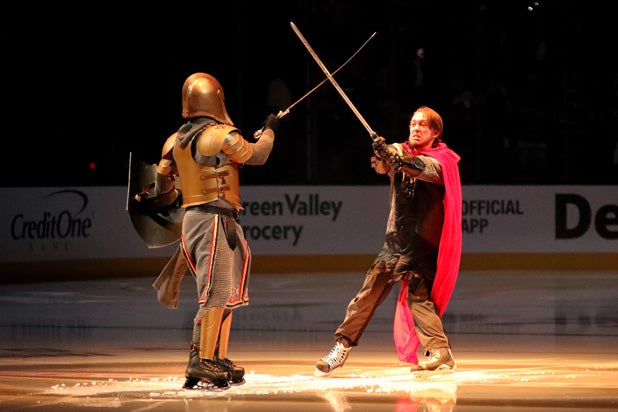 Boxing worthy announcement
The T-Mobile Arena hosted some high-profile boxing matches — most notoriously the Floyd Mayweather Jr. vs. Conor McGregor fight — before the Golden Knights came to town, so it was only fitting that the game had a real-life boxing announcer firing up the crowd as Michael Buffer delivered his catchphrase “lets get ready to rumble.” Of course, hockey is also known for its fights and we saw a few of them on the ice too.

Later in the night, Mayweather himself was shown on the jumbotron from his seat rink-side, sparking loud boos from the crowd. 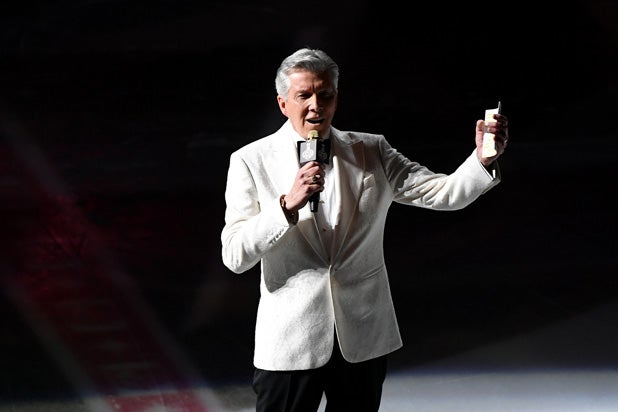 “Star Spangled Banner” gets the Knights treatment
While the audience respectfully stood for the singing of the “Star Spangled Banner,” which was especially moving as it was Memorial Day, one line did get a special crowd input as “gave proof through the night, that our flag was still there” had “night” changed to “Knights” by the enthusiastic fans.

The King is alive and a Knights fan
In true Vegas style, a whole section of fans were dressed as Elvis Presley. We assume they were going to their regular jobs officiating weddings at a chapel on the Strip after the game.

Magical movie moments
The Golden Knights incorporated countless cult movie scenes into their show, with a “Wayne’s World” clip airing on the big screen when they first scored … and the “Office Space” printer smashing moment when the Capitals got a goal. 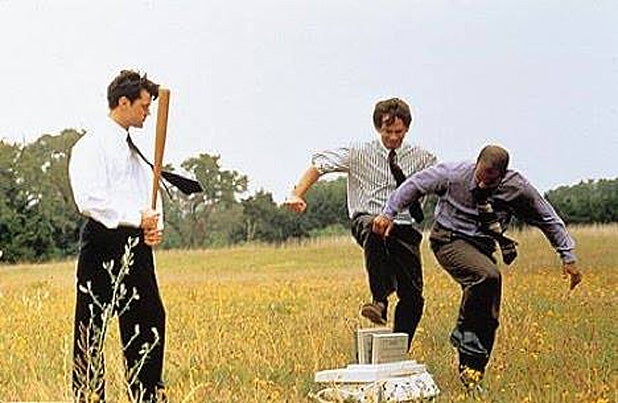 Gladys Knight sings “God Bless America” — and gets a birthday cake
Not only does Gladys Knight regularly perform in Vegas, she also has the perfect last name to represent Sin City’s first professional sports franchise. The Empress of Soul performed “God Bless America” in the first intermission of the game, and then got a surprise of her own when a chocolate cake was wheeled out in honor of her 74th birthday on Monday.

Acrobatic fan challenges
Most teams get their fans involved in the action by challenging them to hit half-court shots or something equally wacky, but of course Vegas had to pull out all the stops and involve genuine Cirque du Soleil performers then have fans try an mimic their moves. While the first guinea pig fell flat on his face, the second guy pulled off a very impressive one-armed balance to win.