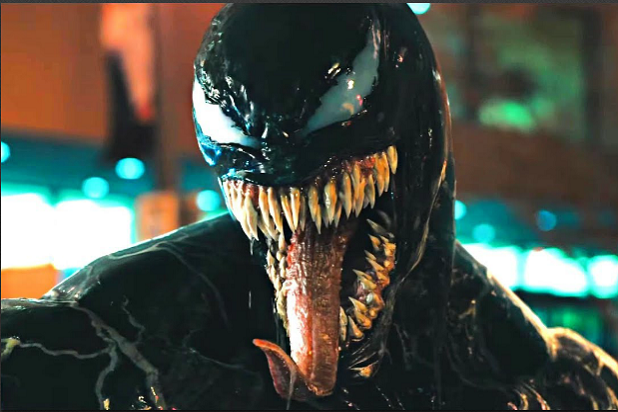 The first reviews and reactions to Sony’s “Venom” are in, but unfortunately for fans of the symbiotic alien at the center of Sony’s “Spider-Man” sorta-spinoff, they’re mostly not great.

Variety’s Owen Gleiberman meanwhile calls it “a textbook case of a comic-book film that’s unexciting in its ho-hum competence, and even its visual-effects bravura.”

And writing for The Hollywood Reporter, Todd McCarthy deems “Venom” to be “thoroughly irredeemable.”

Also Read: 'Venom' Film Review: Tom Hardy Gets Buried in CG Goo, as Does the Plot

But it wasn’t all bad. Some critics embraced what they saw as an imperfect, but fun film with camp sensibilities. For instance, Jonathan Shieber of TechCrunch cited its “script that aims for humor and hijinks and (seemingly) embraces the camp within its source material.” And Molly Freeman of Screenrant called it “a fun and entertaining ride.”

And even The Telegraph’s Robbie Collins, who panned “Venom,” still deemed it “interestingly terrible” on Twitter.

Based the classic “Spider-Man” comics villain,  though not a part of the Marvel Cinematic Universe, the film stars Tom Hardy as Eddie Brock, a journalist attempting to save his career by investigating a shady corporation. He instead bonds with an alien symbiote that gives superpowers to its host. Directed by Ruben Fleischer from a script credited to Jeff Pinkner, Scott Rosenberg and Kelly Marcelt, it co-stars Michelle Williams, Riz Ahmed, Scott Haze and Reid Scott. It hits theaters Friday.

“Leaping from plot point to plot point without the hindrance of logic or characters, this big-screen return of the legendary Spider-Man nemesis — last seen in the franchise-hobbling “Spider-Man 3” — is aggressively loud and stupid without being much fun at all. It exists as a waste of time (although, one hopes, a sizable payday) for some very talented actors, and it’s proof that even Marvel doesn’t always get it right.”

“The best description of Venom as a movie is provided by a quote from the titular antihero itself: “An armless, legless, faceless thing… rolling down the street like a turd in the wind.”

“‘Venom’ is certainly a flawed superhero movie, but Tom Hardy’s performances as Eddie Brock and Venom make for a fun and entertaining ride.”

“To be clear, ‘Venom’ doesn’t quite hit the meta-movie high notes that made ‘Deadpool’ a smash, but powered by the performances from Williams and Hardy (who seem to have chemistry) and a script that aims for humor and hijinks and (seemingly) embraces the camp within its source material, Sony should have a solid foundation on which to build a new superhero franchise.”

“Venom could have been a fun creation, but the film spends too long watching him… originate. The movie ‘Venom’ actually wants to be is the sequel.”

“The only startling moment in the thoroughly irredeemable Venom that makes you sit up and take notice comes at the 71-minute mark, when the sight of a disheveled, stubbly, sweaty and bloated Tom Hardy jolts you with the realization that here is the perfect actor to one day play Harvey Weinstein.”

“An absurdly sloppy comic-book extravaganza about a noggin-chomping villain who becomes something of a hero, ‘Venom’ is like its title character: so unbelievably bad it’s almost good. Almost.”

“‘Venom’ can be quite a lively watch, both as a reminder of why Hollywood stopped making superhero films like this, and also for the occasional glimpse of the off-the-wall, star-driven freak-out that might have been: Hardy did say earlier this week in an eyebrow-raising interview that his favourite 40 minutes of footage did not make the final cut, which is easy to believe. But in terms of basic entertainment, let alone as the foundation of a franchise, it is miserably shaky stuff.’