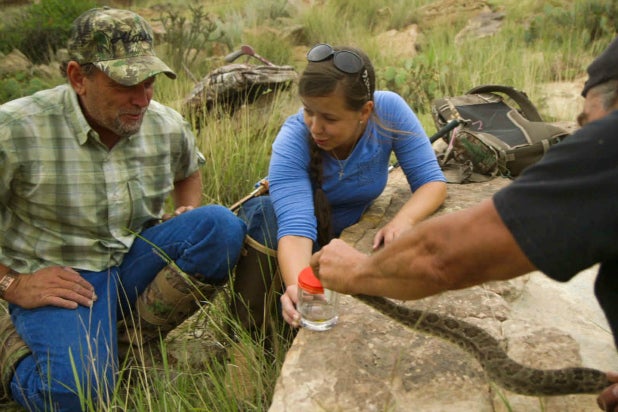 In an apparent effort to get its reality stars killed, Discovery Channel has ordered series “Venom Hunters,” TheWrap has learned.

Each year, venomous snakes kill over 100,000 people and hospitalize thousands more. So let’s slay ‘em all, yes? (The snakes, not the bite victims.) Actually, we can’t do that, because the venom is also used to save lives via the production of anti-venom. Problem is, anti-venom supplies are dwindling every year. Enter Discovery Channel and its team of venomous snake hunters, who are much braver than you and I, and will attempt to collect venom from the world’s deadliest snakes for the noble effort.

Beyond anti-venom, the substance is also being used these days as a key part of cutting-edge medical research that aims to treat diseases such as diabetes, heart disease and even cancer. There are 600 species of venomous snakes worldwide — though we’re not sure if that’s a good thing or a bad thing for our reality series protagonists.

Here are the four teams:

Tim Fitzer (53), Kevin Baker (52) and Hannah Lockhart (27): Tim Fitzer from Tulsa, Oklahoma, is a Native American taxidermist, snake hunter and all-around outdoorsman. He has been bitten by venomous snakes five times and works alongside his close friend and teammate of 35 years Kevin Baker and tough newcomer Hannah Lockhart.

Ed Chapman (76) and Justin Bottrell (34): Ed Chapman from Miami, Florida, is a legend within the venom collection and research community. Top labs and medical researchers from all over the world seek out Ed’s high-quality snakes, so in order to keep up with the increasing demand, he has brought on an apprentice, Justin Bottrell. Together, this duo has traveled all over America, keeping clients’ shelves stocked and Ed’s business booming.

Dan Massey (45) and Melanie Massey (43): Husband and wife team Dan and Melanie Massey from Sahuarita, Arizona, are inspired by their love of science, research and animal conservation. Although Dan is a bilateral amputee, he sees his prosthetic legs as an advantage, so not even injury will slow down the team.

Brian Barczyk (45) and Chewy (47): Brian Barczyk from Shelby Township, Michigan, has over 25 years of experience breeding and working with over 30,000 snakes and also owns one of the largest reptile collections in the world. His teammate Chewy is an expert in handling non-venomous snakes, so he has a lot to learn from Brian.