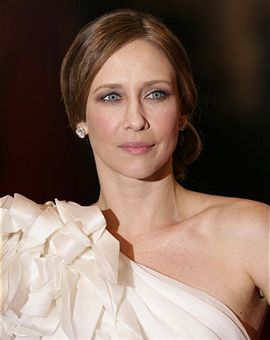 Oscar-nominated "Up in the Air" actress Vera Farmiga is set to star in and make her directorial debut with the indie film "Higher Ground," according to Production Weekly’s Twitter account (@prodweek).

The film is based on Carolyn S. Brigg’s memoir "This Dark World," which follows "one woman’s immersion into Fundamentalist faith and her decision, 20 years later, to leave it all behind," according to Amazon‘s book synopsis.

People forget that before she butchered a Boston accent playing Leonardo DiCaprio’s shrink in "The Departed," Farmiga starred in Debra Granik’s gritty indie "Down to the Bone," which won her Best Actress from the L.A. Film Critics Association.

I’ve never seen the film, but it’s been lingering near the top of my Netflix queue for nearly a year (I’ve had a lot of catching up to do with AMC’s "Mad Men").

Farmiga is currently filming Duncan Jones’ sci-fi movie "Source Code" opposite Jake Gyllenhaal. Ben Ripley’s screenplay was recently named the #1 Favorite Script by readers of the popular blog ScriptShadow. I can’t wait to see how that one turns out.

The actress next appears in "Henry’s Crime," co-written by "Anvil! The Story of Anvil" director Sacha Gervasi, opposite Keanu Reeves. She’s also set to star in Madonna’s "W.E.," which is slated to shoot this summer along with "Higher Ground."

As hard as I try to forget the Robert De Niro-Edward Burns film "15 Minutes," that’s where I first remember noticing Farmiga’s striking looks. I thought she was excellent in "Up in the Air" and "Nothing but the Truth," and it’s a testament to her acting ability that she’s pulled off material as ridiculous as "Running Scared" and "Orphan," which I rewatched the other night on HBO with a few friends who were absolutely terrified by the bizarre horror film.

Speaking of "Orphan," interesting side note: I saw the film on a weekday afternoon at the Grove where "Up in the Air" director Jason Reitman sat two rows in front of me. He received a flurry of text messages about an hour into the movie and walked out. I wonder if he ever caught the oh-no-they-didn’t! second half … I also caught him taking photos of a poster in the lobby for "Jennifer’s Body," but hey, the guy’s got every right to be proud. He’s the youngest filmmaker to have received two Oscar nominations for Best Director.