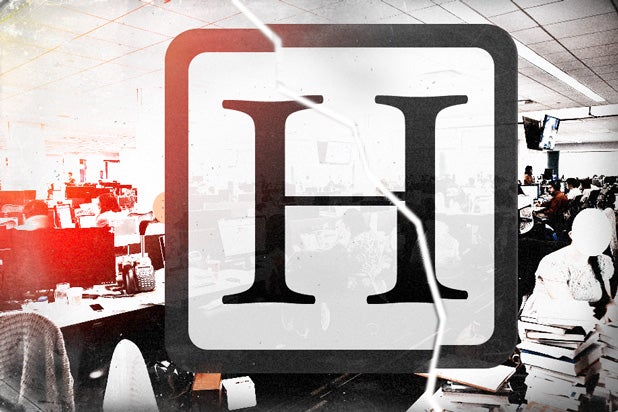 Verizon is exploring the possibility of selling off the Huffington Post, the Financial Times reported Friday.

According to the FT, two individuals familiar with the situation say Verizon has raised the possibility with several potential buyers. However, a formal sale process has not been initiated, and all discussions are at very early stages, the FT said.

Representatives for Verizon did not immediately respond to a request for comment from TheWrap, but a spokesperson told FT, “We don’t comment on rumours and speculation.”

Verizon acquired the Huffington Post when it purchased AOL in 2015 for $4.4 billion; after buying Yahoo for $4.7 billion in 2017, it merged the two into a new media division, which also included other Verizon-owned properties like Tumblr.

It’s been a tough year for employees of Verizon’s media division. In January, the company laid off 800 employees in its media division, including an unspecified number of Huffington Post employees. And in August, Verizon sold Tumblr to Automattic Inc. for under $20 million. That price was pennies on the dollar for Verizon; Yahoo purchased the blogging platform in 2013 for $1.1 billion.

The Tumblr sale came less than a year after Verizon made the decision to ban pornography on Tumblr, which contributed to an almost immediate 33% drop in first-time mobile users last quarter, according to TechCrunch. Automatic CEO Matt Mullenweg told the Wall Street Journal the company had no plans to change its ban on adult content.