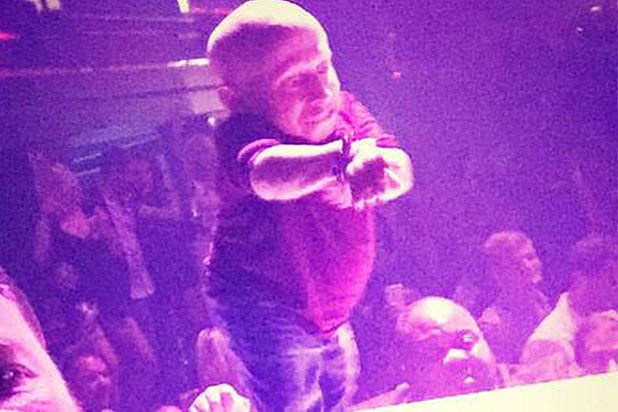 Verne Troyer gave fans a bit of a scare this weekend.

The actor, who is best known for playing Mini Me in the “Austin Powers” films, took a tumble at LIV nightclub in Miami on Saturday night.

According to TMZ, the mishap unfolded as Troyer danced on a DJ booth. Video from inside the club showed him plummeting off the booth and hitting his head on a speaker.

Fortunately, club owner Dave Grutman was nearby to help him up, and Troyer continued to party.

We’re not sure if he took to Twitter before or after his fall, but the actor tweeted a picture from LIV along with the caption: “Saturday nights in Miami be like @LIVmiami @DaveGrutman.”

It’s not the first time Troyer has given fans a scare.

In March, he suffered a seizure at a meet-and-greet during the Heart of Texas Comic Con in Waco, Texas.

Troyer’s rep said at the time that he was taken to a hospital as a precautionary measure and underwent several tests before being released.

Shortly after the March incident, Troyer posted a video on Twitter saying he was “doing fine.”

Watch the video of his Miami mishap below.