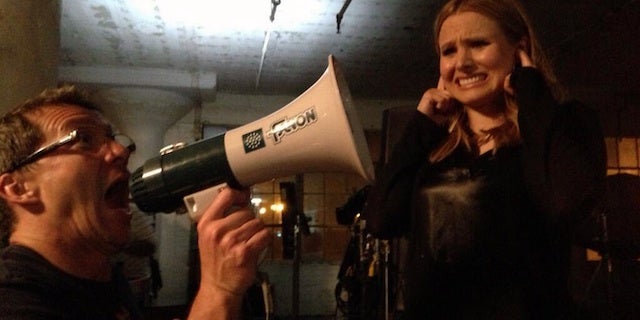 The folks behind the "Veronica Mars" movie can only spend one day at San Diego Comic-Con: Friday, July 19.

"We'd love to be there longer and meet more of you, but we'll be shooting late the night before," the film's associate producer Ivan Askwith told Kickstarter backers on Monday.

"And as soon as we’re done, we’ll turn around and come back to L.A. for our final day of production."

But, the cast and crew are making the best of their time at the fest with three events:

"They'll be talking about the production and our amazing fans, showing a little bit of exclusive footage, and taking questions from the audience," Askwith explained.

2.)  An official signing: Most of the panelists will stop by the Warner Bros. booth to sign autographs. More details to come, but fans will be able to get tickets and wristbands in advance. Bell is sitting this one out.

"She just gave a birth a few months ago. You heard about that, right? We need to make her get some rest," the associate producer explained.

3.) An evening fan event: Most of the cast and crew will be there and you don't have to be registered with SDCC – it's open to the public. While some Kickstarter backers have already received tickets, lines will open at 6 a.m. PT for the remaining tickets. Follow the movie on Twitter and/or Facebook for details.

"In addition to having all of the panelists from the morning session, we’ll show you even more first-look footage, take your questions, and maybe have a few surprises," Askwith teased.

"Veronica Mars" set multiple records for Kickstarter when the campaign launched in March, becoming the fastest project to reach $1 million, doing so in a little more than four hours. It reached its $2 million goal the same day and has had more than $5.7 million pledged in total.