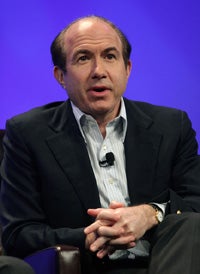 Having locked up Les Moonves to a similar extension in February, Sumner Redstone announced on Thursday a new contract for Philippe Dauman, Viacom’s chief executive officer. He’s served in that role since 2006.

Dauman’s deal now extends through 2016. His current contract was set to expire next year.

Dauman retains his seat on the board, too.

Here’s Redstone’s statement: "Phlippe is a great leader who has demonstrated an extraordinary and consistent ability to deliver results for all Viacom shareholders. Phlippe has strengthened Viacom’s iconic entertainment brands, increased efficiency in every area, profitably extended our worldwide footprint, and forged significant long-term agreements with distribution and other partners. Most important, he has revived our creative spirit and our focus on innovative and distinctive content. With nearly 25 years of entertainment industry experience and a unique connection to Viacom, Philippe has the perspective and the vision to lead Viacom to new levels of success for many years to come."