Viacom investors don’t appear to be bracing for a boffo earnings report, as sellers sent the company’s stock down nearly 8 percent Wednesday — just hours ahead of its Thursday pre-market second-quarter earnings release.

With upfront and newfront seasons here (the time of year when media companies present their programming to advertisers), concerns about the effect of cord-cutters as they move toward slimmer, internet-based services have likely been a contributing factor in a broader selloff of old-line entertainment stocks Thursday.

Also Read: The Game Sues Viacom for $20 Million Over 'Violent' Contestant on His Dating Show 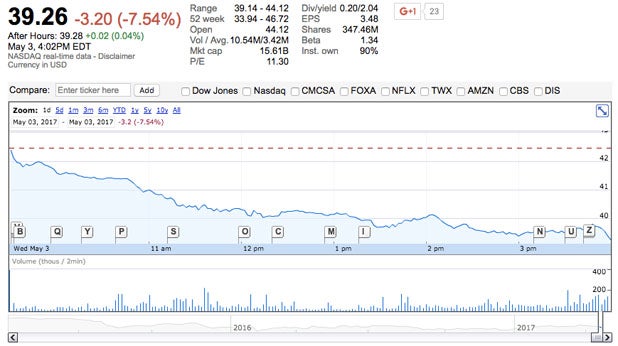 Shares of 20th Century Fox were down 5 percent on the day, while Disney finished off more than 2 percent. However, while Fox and Disney still have popular broadcast networks and sports programming to lean on, Viacom doesn’t have either.

And with streaming live TV services becoming increasingly popular among people who are turning away from traditional pay-TV packages, Viacom can’t count on its networks being a must-have for a younger crowd opting for a smaller — and cheaper — set of channels.

AT&T’s DirecTV Now includes Viacom channels like BET, Nickelodeon and Comedy Central, but the company has been left off other streaming options, like Google’s YouTube TV and Hulu’s just-launched live TV service.

Viacom’s movie division, Paramount Pictures, has also struggled in recent years, and just named former Fox Filmed Entertainment Chairman and CEO Jim Gianopulos to the same position at the Hollywood studio, succeeding Brad Grey. During its first-quarter earnings call earlier this year, Viacom CEO Bob Bakish — who was elevated to that position late last year — announced plans to develop movies around Viacom’s brands, beginning with an “Amusement Park” movie, based on the Nickelodeon property and planned for a summer 2018 release.

Furthermore, Viacom was hit by a lawsuit Monday in which rapper The Game accused the company of allowing a contestant with a “long and violent criminal history” on his VH1 dating show, “She’s Got Game.” The rapper is asking for $20 million in damages, which would be a drop in the bucket compared to Viacom’s $15.6 billion market cap — or in terms more relevant to the company’s shareholders, about one-fifth of what former CEO Philippe Dauman took home last year.