Updated with U.S. stock markets now open: Shares of ViacomCBS stock (VIAC) are trading down a steep 18% on Thursday morning. That’s twice what the decline was pre-market.

See the sinkage below. We chose a five-day window to best demonstrate the dramatic drop. 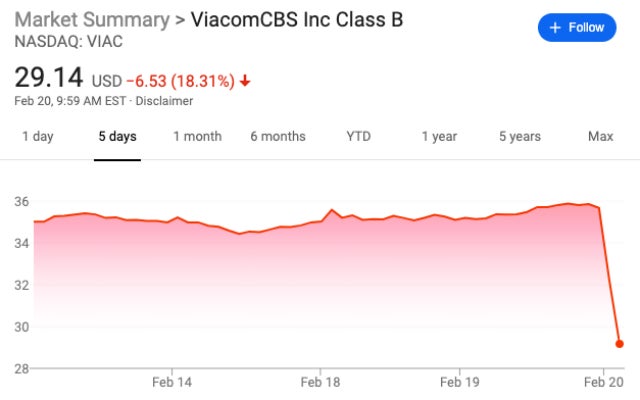 This snapshot comes following the ViacomCBS fourth-quarter and full-year earnings call, which itself followed the company reporting its financial results for Q4 and 2019 in totality. Guess how those went? Yeah, not good.

Those allowable adjustments are mostly due to the remerging of Viacom and CBS, which split in 2005.

“In less than three months since completing our merger, we have made significant progress integrating and transforming ViacomCBS,” Bakish, the company’s president and CEO, said in a prepared statement accompanying the ViacomCBS earnings. “We see incredible opportunity to realize the full power of our position as one of the largest content producers and providers in the world. This is an exciting and valuable place to be at a time when demand for content has never been higher, and we will use our strength across genres, formats, demos and geographies to serve the largest addressable audience, on our own platforms and others.”

“In 2020, our priorities are maximizing the power of our content, unlocking more value from our biggest revenue lines and accelerating our momentum in streaming,” he continued. “With this as a backdrop, we’ve set clear targets for the year and are providing increased transparency around our business to demonstrate ViacomCBS’ ability to create shareholder value today, as we continue evolving and growing our business for tomorrow.”

Bakish and other members of the senior management team will hold a conference call at 8:30 a.m. ET to discuss fourth-quarter and full-year 2019 in greater detail. The regular U.S. stock market trading day begins an hour later.