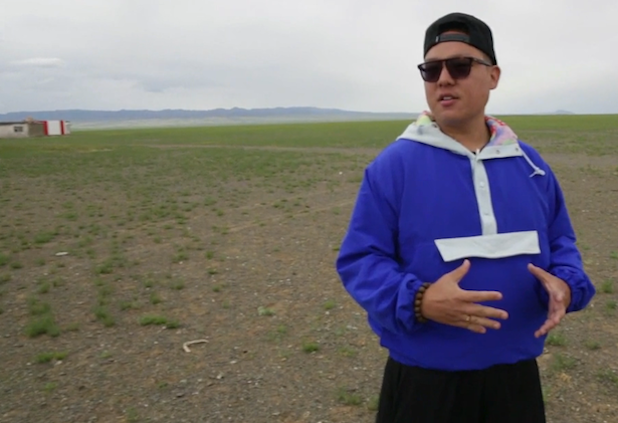 Eddie Huang worked as a lawyer, chef, drug dealer and stand-up comedian — all before the tender age of 30. He is best known for his work in the food world thanks to his restaurant BaoHaus, a Taiwanese bun shop in New York, and for his criticism of fellow chef Marcus Samuelsson.

His food savvy and his strong opinion caught the attention of Vice, which asked him to make a web series, “Fresh Off the Boat.” The second season of that show debuted Monday.

Yet if food is why Vice wanted to work with Huang at first, it is no longer his focus.

“I respect the power of food and I love food, but I want to say a lot of things that have nothing to do with food,” Huang told TheWrap.

In the second season, Huang travels to Detroit with rapper Danny Brown, where they smoke a blunt while eating burgers. He also travels to Mongolia, London and Russia.

TheWrap spoke with Huang about his kinship with Anthony Bourdain, nomads in Mongolia and why Vice no stopped giving him notes.

Where did the idea for this show come from?
Food has allowed me the ability and gave me the audience to talk about these things. I have a very unique freedom, doing this show on the Internet, to go places, get people’s opinions on the ground and report them back. Our show is one of the best outlets for the every day person to speak to the rest of the world. It’s not a traditional travel show or food show.

I’m not a documentarian either. I’m a dude with a camera and a crew who just wants to ask questions.

Did you get any feedback from Vice on the first season?
Season 1 there were a lot of notes – people saying we need more food, this is still a food show. Then there were people saying titles for videos like “Eating Crazy Ass Street Food in Taiwan” will get more hits.

In a lot of ways wherever you are you get the same spiel about advertisers and rates. On the Internet, it’s about hits and what time of day to put things up.  I could give a fuck.

All those notes from season 1, we had to pay attention a little bit. After Season 1, people respected the show and liked it. Vice is awesome. I took a lot more control. I worked entirely on the pre-production process and in the edit. The show is my baby.

What is your focus for this next season?
Cities and worlds in transition. Living in America you’re told you have freedom, but do we really have it? Is there freedom in other places of the world?

I started to look at Mongolia and there you don’t have as many environmental restrictions, not as many governmental restrictions. It’s in the early stages of democracy and capitalism. Some people are very limited by the freedom and flow of information and access to the Internet.

So how did you settle on Mongolia?
The two places I wanted to go were Tibet and Mongolia. Tibet we couldn’t clear.

Mongolia is pristine and untouched; it’s the least densely populated country in the world. I picked Mongolia based on that fact alone.

You’ve seen it with Pittsburgh and the steel mills there. I don’t understand why every city seems like it’s immune to this. Big business comes in and you forget it’s going to leave again.

Did you find a country you thought was more free than the U.S.?
The nomads in Mongolia. Moscow definitely not. The police in Moscow shake citizens down.

How do you keep food involved in the show?
I could travel around the world and smoke weed with everybody. These TV people are always trying to come up with a gimmick or a gag for a show. Food is just something that’s universal. Food is not the focus of our show. It’s not the subject of our show. It’s the tool we use to disarm people and get them into a conversation.

So how many episodes are you smoking in?
I got to smoke once in Mongolia but I couldn’t shoot it on camera. The penalty there for weed is the same as with crack cocaine.

Russia was the one place we couldn’t smoke. London was easy.

Do you watch any other travel shows?
I try not to read too much that’s similar to what I write. I want to maintain originality. So I don’t watch much on the Internet or on TV. I watch Tony Bourdain, who has always been an inspiration and a supporter.

Tony definitely changed my life. At a time when the food community had things to say about me when I wrote that Marcus Samuelsson article [Huang wrote a sharply worded screed about Samuelsson’s memoir] he stood by me and supported my book.

But we used slow-mo on the show in Detroit and when we got back Tony’s show “Parts Unknown” premiered and he was using slow-mo. Everyone on the crew was like, “mother fucker.”