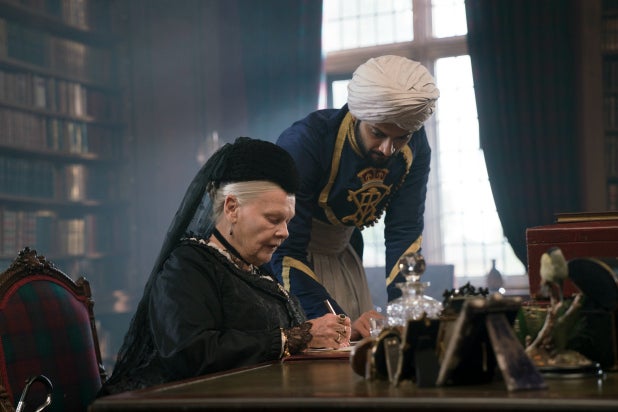 Forget the “Fifty Shades” movies: For real dominance and submission, check out “Victoria & Abdul,” which is all about the platonic friendship between the elderly Queen Victoria and one of her Indian subjects. As though their difference in wealth and station weren’t enough of a relationship imbalance, the old queen’s interest is clearly piqued when the much-younger man stoops down and kisses her foot at a luncheon.

The actress has, of course, tackled the role of Victoria Regina previously, in 1997’s stultifying “Mrs. Brown,” and once again she plays the monarch as a lonely widow, surrounded by suck-ups and schemers, disappointed by her children and starved for human companionship. In the late 19th century (years after John Brown passed away), she finds that friendship from Abdul Karim (Ali Fazal, “Furious 7”), a Muslim clerk at an Agra prison who is selected (mainly because of his height) to travel to London to present her majesty with a ceremonial coin.

Told not to make eye contact with the queen at the sumptuous banquet where the presentation takes place, he nonetheless gives her a big-eyed smile; Victoria likes the looks of him and keeps him around, and after the foot-kissing incident, he becomes an intimate aide. She asks him to teach her Hindi, but he tells her that a woman of her station should learn the more formal Urdu instead. Soon, he is her “Munshi,” a beloved teacher and adviser, much to the chagrin and then growing anger of her household staff.

Those needing a fix of fanciness between seasons of “The Crown” will luxuriate in the film’s finery; Victoria takes Abdul to the royal residences at Balmoral and the Isle of Wight (as well as Buckingham Palace) and even on a trip to Florence, where Puccini (Simon Callow) himself serenades Her Royal Majesty with a selection from his upcoming opera “Manon Lescaut.” Cinematographer Danny Cohen (“The King’s Speech”) turns on the gloss throughout, making every scene look like a souvenir booklet you’d pick up in Piccadilly Circus.

Dench, reuniting with her “Philomena” director Frears, gives us a superb Victoria as a woman over 80 who’s fed up with the trappings of power and a rigorous daily schedule of appearances. Her growing closeness with Abdul — even after she learns he’s married, even after she learns that India’s Muslim leader has declared a fatwa against her — gives her the strength to stand up to a prime minister (Michael Gambon) and oldest son (Eddie Izzard) who would like nothing more than to shove her out of the way.

Abdul, however, remains a cipher. He’s big and bouncy and smiling the first time we see him, heading to work at the prison, and he doesn’t change much over the course of the film. Why is he so accommodating to the empire occupying his native land? How would he be treated at home after consorting with the enemy? Would he want to use his influence to nudge Victoria toward changing her kingdom’s policies toward its colonies? Once he goes from being a humble servant to someone who has servants of his own, does he change? “Victoria & Abdul” can’t be bothered to tell us.

Abdul’s fellow traveler Mohammed (the hilarious Adeel Akhtar of “The Big Sick” and “Four Lions”) gets to grumble on behalf of Victoria’s non-fans in South Asia, but Abdul just smiles and accommodates and holds the old lady’s hand. He’s a person who really existed — the film hedges it bets with an opening card that it’s “Based on a true story…mostly” — but the movie turns him into a twinkly hybrid of Forrest Gump and Pollyanna.

There’s not much to “Victoria & Abdul,” but as a delivery system for Judi Dench, it serves its purpose. Otherwise, it’s just Buckingham Palace fetishism cranked up to peak mumsy.