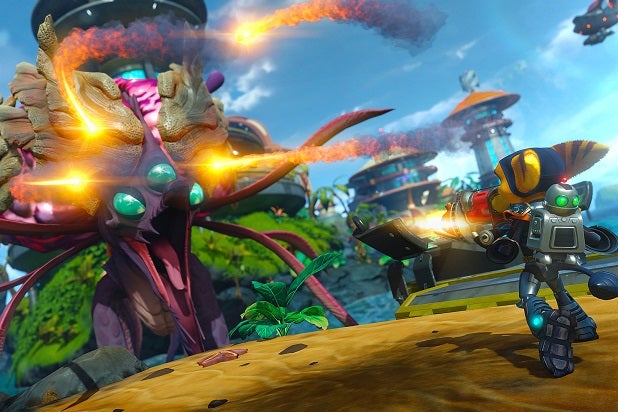 “Ratchet & Clank,” one of Sony’s most ubiquitous video game franchises, is coming off the longest gap between games since the series began way back in 2002. It’s been two-and-a-half years since their last adventure, “Enter The Nexus,” which hit PlayStation 3 in late 2013. Now we’ve got a new game and movie coming up later this month — you might be tempted to call this a “Ratchet” rennaissance.

But making that sort of leap would be more than this game deserves. “Ratchet & Clank” is a sort of a reboot of the series and also a remake of the original game. Officially, it’s based on the upcoming animated film, which is in turn based on that first “Ratchet & Clank” title. But it’s a series that, fortunately, is self aware enough to brag about that on the back of the box.

And while it’s not revolutionary in how it plays, nor will it stun you with its profundity, “Ratchet & Clank” is still a great game. Great in its lack of pretense. Great in its sense of humor. Great in how pure a form of entertainment it is. It’s just a good time.

Maybe we needed a long break to really appreciate what Insomniac Games had built the franchise into. Between 2007 and 2013 we got nine “Ratchet & Clank” games. Some of them were bad — like “All 4 One” and “Full Frontal Assault,” a pair of titles that were cheap attempts at franchise exploitation by Sony. Some of them were the best entries in the whole series — “Enter The Nexus” and “A Crack In Time.” But by the end of that stretch they’d established a really solid formula, one that this “Ratchet & Clank” reboot adopts fully in service of a really solid gaming experience.

The story takes us back to the beginning, before the titular duo were galaxy-famous adventurers who’d traveled across known space and messed with the space-time continuum and done all that other stuff you do over the course of 13 games. Ratchet works at a garage. Clank is a defective warbot. They don’t even know each other yet. A large space corporation, Drek Industries, is destroying planets and taking chunks of them to try to assemble a new homeworld for the Blarg species.

As in “Enter the Nexus” and “A Crack in Time,” you fly to various planets, explore them at your own pace while battling indigenous wildlife and enemy soldiers. You have the series-standard arsenal of goofy weapons, like the robotic, trash-talking bodyguard Mr Zurkon, as well as some new toys like the Pixelizer (a shotgun that pixelates enemies).

The humor ties it all together. “Ratchet & Clank” has always been funny, and it still is very funny now. Weird jokes play at random intervals as you direct Ratchet around the various environments he and Clank travel to, so even if the gameplay itself gets stale at some points it’s still entertaining. The jokes never get tired.

Yes, I know, I haven’t said much of substance here. There’s not much substance in “Ratchet & Clank” to analyze, honestly. It’s a shallow but sharply written PG-rated comedy experience. It’s lacking in some ways, without much in the way of mechanical or emotional depth. It’s a shame Insomniac and Sony decided to take it back to the beginning, because the relationship between Ratchet and Clank — two one-of-a-kind creatures who have no one but each other to lean on — had gotten deep. It’s a meaningful loss, undeveloping their friendship by rebooting it.

But at the same time, playing a new “Ratchet & Clank” game after so long feels good. It feels like coming home. Light, funny, chill, a combination that’s all too rare these days.

This was a franchise on the ropes in the last generation. Maybe this fresh start will give it new legs to stand on. This reboot is good enough for that, at least.