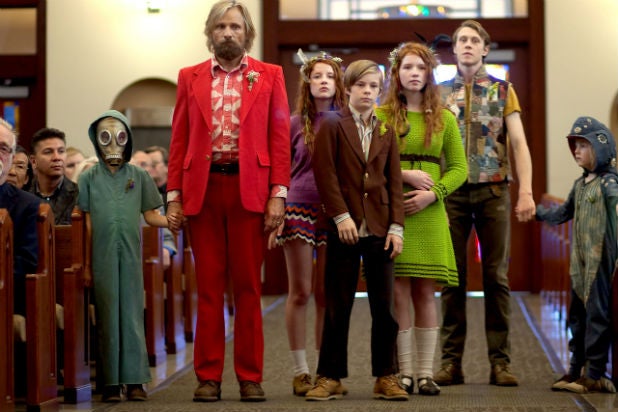 Viggo Mortensen stars as father to a clan of intellectual children living deep in the wilderness of the Pacific Northwest — precocious, whip-smart, athletic and mostly aware to what effect they are residing in isolation from contemporary society.

After a bit too much time establishing their minimal, spiritually superior lifestyle, Mortensen learns his wife committed suicide while off the compound seeking treatment for bi-polar disorder.

This kicks off the film’s core dilemma, as Mortensen weighs exposing his family to the modern world in the form of a visit to his sister and ultimately his wife’s burial where tensions with her wealthy, A-consumer parents run high.

From the first frame Mortensen completely owns the role of poet meets MacGyver, his movie star face a bit softer and grizzlier. The kids are naturally adorable spouting hatred against Big Pharma, denouncing campaign finance reform efforts and jamming in a campfire music circle. Sadness and cynicism cut through the twee.

It’s George MacKay, however, playing the eldest son, who completely burns down Ross’ forest. MacKay conveys emotion brilliantly, and Ross as screenwriter gives him every possible note to hit: boy who becomes man, Romeo (in a memorable trailer park first kiss), grieving son, surrogate parent. He steals it, further proved by the rock-concert cheers when his name appeared on end credits.