When “Vikings: Valhalla” debuted on Netflix in February, it quickly captured the globe’s attention, catapulting it to the top slot on the streamer’s most-watched shows list.

“It was pretty great,” Leo Suter, who plays Prince Harald in the show, told TheWrap when we caught up with him just last week. “Massive appreciation and thanks [to] everyone for watching and for enjoying. This is a thing that we’ve sort of been sitting on for two years, and to finally give it to the world felt really special, and for it to be warmly received on top of that was the icing on the cake.”

Fans haven’t stopped watching the eight episode drama, from showrunner/executive producer Jeb Stuart, which is set about 100 years after the original History Channel drama since it dropped. The stories of a new generation of Vikings – Leif Erikson (Sam Corlett), Prince Harald (Suter), and Freydis Eriksdottter (Frida Gustavsson) – as they face off with England, and their own kind, has kept “Valhalla” in the Top 10. In fact, Netflix users streamed 19.8 million hours of the show just in the last week. 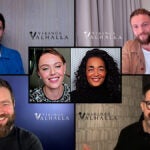 So, it’s only fitting to break down some of the biggest moments of the finale for Prince Harald with Suter, now that he can finally talk about them.

Across Season 1, Harald had plenty of hero scenes, whether it was helping to unite the Vikings against the English, rescuing a nearly-dead Leif during a scouting mission gone wrong, or taking down London bridge. One of his greatest tests of the season, though, came when the show pitted Viking against Viking as the Christians among them sought war against Kattegat, where many pagans dwelled. Before the Christian group, led by Olaf Haraldsson, Prince Harald’s half-brother, and the frightening Jarl Kåre, attacked, the Norwegian royal left Kattegat and went over to his brother’s side in an attempt to quell the conflict.

“He’s in a real crisis point,” Suter said of how Harald sees the situation. “And I think he also knows that he’s the only person who can sort this stuff out. And he can try and make a solution. But obviously that goes wrong. And in the end, he is in a battle, thrashing and slashing, getting wounded as a result. But yeah … to enter into the enemy territory, the enemy camp, was really interesting because suddenly, you’re on the other side. And it felt weird. It felt like I was betraying my friends, Freydis and Leif.” 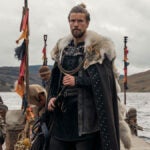 After failing to bring the two sides together, Harald ends up left on a hillside above Kattegat, guarded by two men wary of which side he’s truly on. Eventually, he manages to break free and join the battle, fighting on the side of his friends and Kattegat, while his half-brother Olaf wages war to take the Viking stronghold.

Although Harald is known for his fugue-state like fighting style as a Berserker, Harald still takes some heavy blows and in one of his final scenes, he seems like he is not going to make it. As he sits on the ground, though, holding his open, bloody wounds, a booted, leather-clad figure arrives at his side – his love, Freydis, who gets him out of the city.

“I think that was my favorite moment of the whole season. And that … moment of a close up shot of Harald thinking that he’s lost everything and seeing Freydis appear in [the] dust, that really was my favorite moment because I felt like I was coming off the high of a great sense of achievement, having just done that fight,” Suter said. “They alway say fights have got to have meaning, and there’s got to be emotional purpose behind it, right? And that little moment really encapsulates the whole thing, because to Harald, he thinks everything is over; he’s lost everything; he’s lost his friends; he’s lost his love. And then, it changes and that’s not the case.

“I really enjoyed filming that and seeing Frida across the market, and she was miles away. I hadn’t talked to her, couldn’t talk to her. I know she’d just been through this huge epic fight, which I then got to see and is everything that it should have been – it’s epic and awesome – and yeah, just that little moment, that flicker in Harald’s eye where it’s like everything’s over and then it’s not, was lovely. And as an actor you want scenes of like big highs and big lows. That was a big low to a big high. And those are always really rewarding.”

While Suter is tight-lipped about Season 2, which has already finished filming (the cast is about to film the eight-episode Season 3 this spring), Freydis saving Harald is meaningful in more ways than just keeping him from dying.

“I’ve got to be careful about how much I can say, but …   she’s rescued him,” he said. “She’s gone out on a limb and she’s taken him away from death really, so certainly that’s going to mean a hell of a lot.”

As the two characters rode off (slowly) on horseback at the end of the season, Harald, a Christian and the prince of Norway, and Freydis, who is a chosen one in the pagan religion, remain very much together.

“Certainly this is a relationship that has transformed from just a casual hookup off the back of a flirty scene on a pontoon in Season 1 to a really meaningful relationship where these two characters know each other really well and love each other deeply,” he explained.

After the Vikings took London earlier in the season and King Canute declared himself King of England, the newly-minted invading royal told Harald a family secret. Olaf was planning to make his own son his successor, and not Harald, back in Norway. Olaf also fought to take down Kattegat at episode’s end, nearly doing so, until Canute’s forces rowed in.

As Suter spoke to TheWrap he was in England, but a return to set was calling.

Production on Season 3 of “Vikings: Valhalla” begins this Spring.