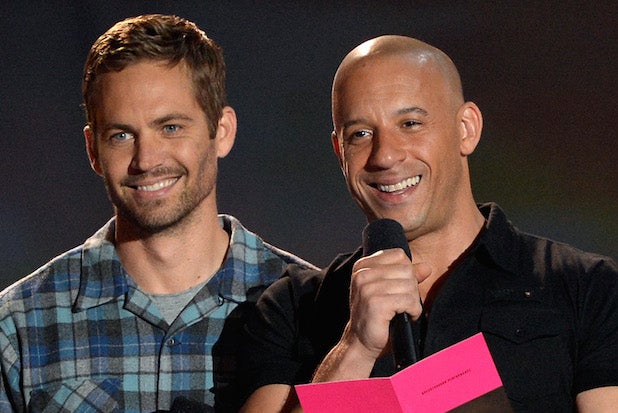 The MTV Movie Awards ran a montage tribute to the late “Fast and Furious” star Paul Walker on Sunday, but the most emotional salute didn’t make it on air.

Vin Diesel, who was on location filming the rest of the seventh “Fast and Furious” film, wasn’t able to make it to Los Angeles for the awards show. But after he and his pal Walker won Best On-Screen Duo for the sixth film in the franchise, Diesel posted a short acceptance speech on Facebook that had him in tears.

See video: Watch Zac Efron Get His Shirt Torn Off at the MTV Movie Awards

“Back in 2002, it was you, the MTV audience, that first acknowledged this brotherhood between Paul Walker and myself by honoring us with the Best Team on Film [award],” he told the fans (who could later watch on Diesel’s Facebook page). “So it’s surreal to be standing here 12 years later, and that you have been so generous to give us this award again. I wish he could be here to see this, but I know he’s here in spirit.”