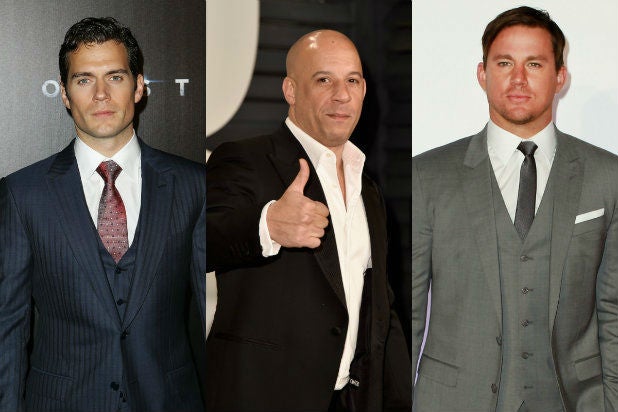 Unflattering paparazzi photos of a shirtless Vin Diesel prove that male stars can be subject to the same body-shaming scrutiny that has plagued women in Hollywood for decades.

“The Last Witch Hunter” star, who continues to make an impressive career out of a gravelly voice and a big pair of biceps, was photographed in Miami appearing softer around the midsection than usual. The celebrity gossip outlets pounced, along with the public, who launched a scathing social media attack.

“Fat and the Furious” jokes abounded — a play on his blockbuster Universal franchise, “Fast and Furious.” Fans found the very sight of him to be decidedly off-brand.

“Vin Diesel taking off his shirt and being fat is like opening a Coke and finding out someone poured RC Cola inside,” wrote one Twitter user. “Apparently, even #VinDiesel gets fat on his off days,” another said. Dozens of blog headlines referred to his physique as “dad bod,” meaning a man who has let his fitness regimen slip entirely.

“We’re simply a few decades behind what happened to females. No one can gain weight or get out of shape without being shamed in the media,” said Dr. David LaPorte, an expert on body image and social media and a psychology professor at Indiana University of Pennsylvania.

“It’s a leveling of scales. You see at the start of the ’60s, Marilyn Monroe is the ideal beauty with normal body weight and body fat. By the end of the ’60s into the ’70s, you had to be thinner to be considered beautiful. Same thing with males,” LaPorte said. “Male actors in movies back then were relatively proportioned, and now you have

“With these extraordinarily muscular guys, there’s a dramatic increase in body dissatisfaction among males. You don’t necessarily have to have huge Mark Wahlberg muscles, but you’d better have washboard abs ready to show — like poor  has learned,” LaPorte added.

Body anxiety has been palpable with leading men for several years — and you can thank the binding spandex of superhero costumes, as well as the gyrating of “Magic Mike” and his merry men.

“I was fat. I was Fat Cavill,” actor Henry Cavill said of his younger years when promoting “Man of Steel” in 2013.

“I’m a fat kid on the inside,” Channing Tatum told Cosmopolitan the same year while promoting the first installment of his male stripper movies. “I love food so much and I fluctuate about 25 to 30 pounds between movies.”

“In Hollywood, being relatively fit is deemed overweight, and with public image playing as large of a role in a young man’s success — you have to put in as many hours in the gym as you do with your acting coach to remain viable,” one top publicist handling working male actors told TheWrap on the condition of anonymity.

And fixating on maintaining a universally pleasing physique can have its consequences. “Ultimately, it over-emphasizes the physical in ways that will have a lasting impact on these men,” she said.

The impact doesn’t exclusively affect the actors, according to LaPorte, but the male consumers who idolize them.

“It’s a trickle-down effect,” the psychology professor said. “A guy who is a consumer of popular media is going to look at their own arms and think, ‘I could use some more muscle.’ If the guy isn’t pathological, there’s nothing wrong with lifting a few weights. It’s healthy.”

“It’s going to be the fringes of these fandoms that become extraordinarily dissatisfied, that leads to depression, reduced social contact, eating disorders and the use of steroids and so forth.”

And just because men are finally feeling the intense pressure women feel to remain aesthetically pleasing at all times, that doesn’t mean it’s a victory for society.

“No, it’s not fair, and women don’t win because now men are getting a bigger piece of the bullying pie,” the publicist said.

Diesel responded to the “dad bod” comments on Monday amidst his press tour for “Witch Hunter.” After mentioning that journalists had brought up the unflattering paparazzi photos, he posted a picture of his 48-year-old six pack on Instagram with the caption “Body-shaming is always wrong!”

It’s not the kind of mission one of his movie characters might take on, but perhaps Hollywood needs a leading man to tackle the issue alongside the women in the trenches.

Vin Diesel taking off his shirt and being fat is like opening a Coke and finding out someone poured RC Cola inside pic.twitter.com/TDz35frLLt

Vin Diesel fans… Do NOT Google "Fat Vin Diesel". DO NOT. Don't. pic.twitter.com/8W5SFcJdCR

>Vin Diesel is fat now Oh no! We should probably bring him behind the shed & kill him with a shotgun Isn't that right Twitter?!? Idiots.

Apparently, even #VinDiesel gets fat on his off days. http://t.co/EKH9Bzzttz