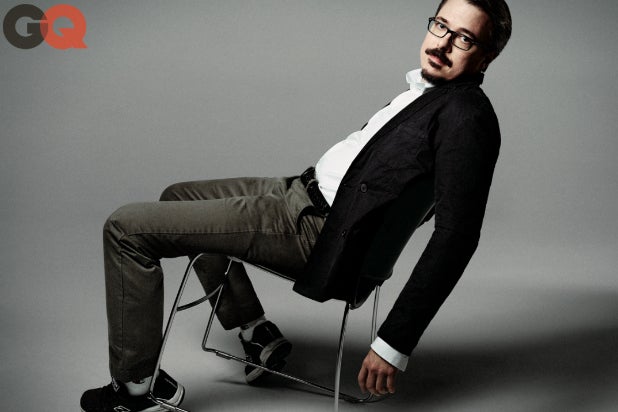 Now that “Breaking Bad” is off the air, Vince Gilligan is watching a slightly different kind of TV: lots of “Columbo,” he admitted in a recent interview.

GQ spoke with the “tired” new Peter Falk fan roughly a week-and-a-half after the finale of his AMC drama roared through cable set-top boxes. Gilligan told the men’s mag that he is feeling “at peace” with the end of an era — one that he created. (Even if he’s totally exhausted.)

But is fan favorite Jesse Pinkman — last seen escaping into the night, maniacally celebrating his new-found freedom — experiencing the same peace? Gilligan is torn on that one.

“My personal feeling is that he got away,” Gilligan said. “But the most likely thing, as negative as this sounds, is that they’re going to find this kid’s fingerprints all over this lab and they’re going to find him within a day or a week or a month. And he’s still going to be on the hook for the murder of two federal agents.”

The man behind potentially the best drama in cable history has his fingers crossed that Pinkman made it to Alaska, changed his name and started anew. Gilligan, of course, could make it so simply by declaring it as fact, but he said that the show now belongs to the masses. (Though no mention of the residual checks being distributed that way.)

So no one truly knows the fates of those who lived to see the end credits of the series.

Gilligan doesn’t expect to replicate the success, no matter how hard he tries. “We tried to make the best show it was humanly possible to make, but you know, the guys on ‘According to Jim’ did the same thing,” he told the publication.

Gilligan invoked “M*A*S*H” when talking about series enders. Gilligan has described the final episode of the Korean War series as not surprising, but satisfying.

And he draws his own comparison on the choice to have main character Walter White perish in “Breaking Bad’s” final scene.

“I realized that this was our version, such as it is, of the M*A*S*H ending,” Gilligan said. “It just felt right that he expire at the end of the series.”