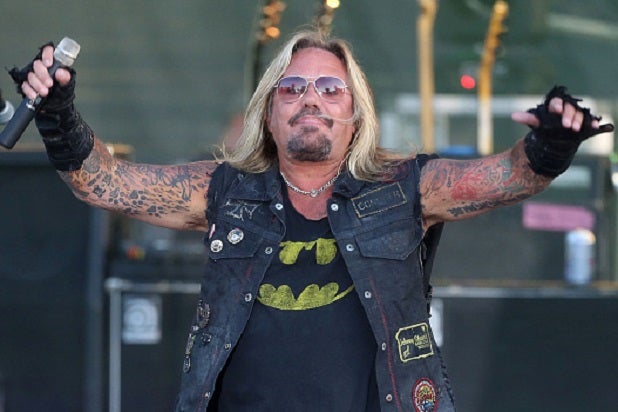 The Motley Crue frontman is being sued by a woman who claims that Neil physically attacked her at the Aria Hotel in Las Vegas, according to legal papers obtained by TheWrap.

In the suit, filed Thursday in federal court in Nevada, Kelly Guerrero claims that she and her son were in Vegas in April when they saw Neil, Carrot Top and Nicolas Cage walking in front of them.

According to Guerrero, she said “I love you” and “My son loved you in ‘Ghost Rider’ and ‘City of Angels'” to Cage as he was putting Neil in a headlock in an apparent instance of “horseplay.”

But things turned serious, Guerrero said, when Cage let Neil loose and the rocker “attacked” her without warning, grabbing her hair from behind and yanking her to the pavement on her back.

Guerrero claims that Neil was “severely intoxicated and/or under the influence of powerful drug(s)” at the time, and when Cage let Neil go after restraining him a second time, the singer “staggered toward yet another woman, grabbing and attacking her. She stumbled, scooped up her cell phone which he had knocked to the ground, and ran out the entrance of the Aria.”

The suit says that Guerrero woke up the next day with pain in her neck, lower back and buttock, and was diagnosed with “back sprain or strain, neck sprain or strain and sacral contusion due to physical assault.” Guerrero claims she was later also diagnosed with a fractured coccyx and “a severe left hip injury.” She also says she’s had to undergo further medical care and psychotherapy as the result of the alleged attack.

Guerrero’s complaint alleges that Neil has “a long history of self-centered, irresponsible, drunken and violent behavior” and a “penchant for attacking those he apparently perceives as weaker and subservient to him, including women and purported fans of the aging ‘rock star.'”

A representative for Neil has not yet responded to TheWrap’s request for comment.

Alleging assault and battery as well as intentional infliction of emotional distress, the suit is seeking damages “in excess of $75,000.”