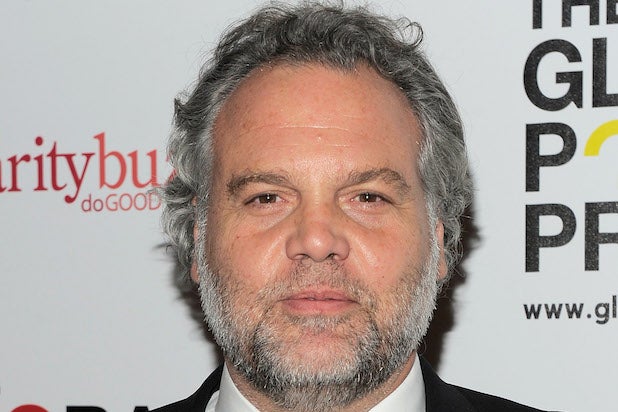 In an inspired casting choice, Universal Pictures has turned to Vincent D’Onofrio to play the villain in “Jurassic World,” an individual familiar with the project has told TheWrap.

Colin Trevorrow (“Safety Not Guaranteed”) is directing from a script he wrote with Derek Connolly, though plot details remain under wraps.

Chris Pratt and Bryce Dallas Howard star alongside Nick Robinson, Ty Simpkins and Irrfan Khan, who will play Patel, the billionaire owner of a new Jurassic Park. An individual familiar with the casting breakdown tells TheWrap that D’Onofrio will play the CFO of the Patel Corporation who projects the image of a normal family man to mask a hidden edge.

D’Onofrio is a potent choice to join the franchise, as he knows how to play both menacing and sleazy. Over the course of his esteemed career, he has played crazed Private Pyle in “Full Metal Jacket,” a racist, homicidal LAPD cop in “Strange Days,” a freaky-looking alien in “Men in Black,” a comatose serial killer in “The Cell,” a sadistic drug dealer Pooh-Bear in “The Salton Sea” and a double-crossing scoundrel in “Escape Plan,” which may come the closest to his “Jurassic World” character.

After saying goodbye to his beloved role as Detective Goren on “Law & Order: Criminal Intent,” D’Onofrio has been working overtime lately, as he recently wrapped a pair of Warner Bros. movies in “The Judge” and “Run All Night,” as well as a Pele biopic in which he plays a soccer coach. However, the movie I’m most excited to see D’Onofrio in is “Mall,” which is based on Eric Bogosian’s excellent first novel. D’Onofrio not only produced and co-wrote the edgy drama, but he also stars as a peeping tom who has his eye on Gina Gershon’s naughty housewife.

D’Onofrio is repped by UTA and Silver Lining Entertainment.