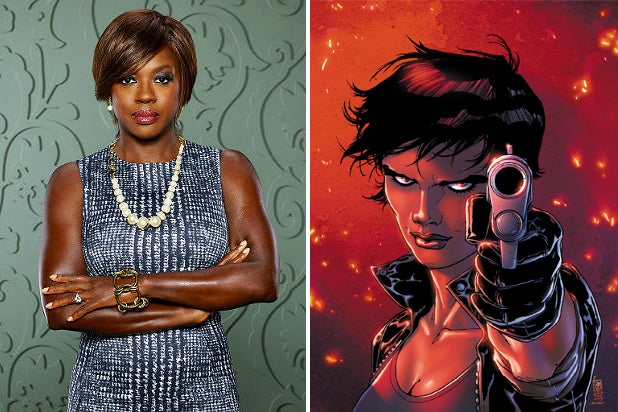 Two-time Oscar nominee Viola Davis is nearing a multi-picture deal to play Amanda Waller in Warner Bros.’ DC Comics Universe, starting with a key supporting role in David Ayer’s “Suicide Squad,” multiple individuals familiar with the project have told TheWrap, which reported on Dec. 2 that the actress was being considered for the coveted role.

Warner Bros. had no comment, while representatives for Davis did not respond to multiple requests for comment over the past week.

First reported by Latino Review, Davis’ casting has been rumored for weeks, and she recently addressed the speculation while doing press for her turn in Michael Mann’s “Blackhat.”

Davis told Nerd Report “I’m working out my schedule for ‘Suicide Squad,’” and that while she hasn’t started reading the comic books, she’s fascinated by the character, who serves the DC Universe in a similar capacity as Samuel L. Jackson’s Nick Fury in the Marvel Cinematic Universe.

“I’m fascinated by her in this world of superhero-ness because she is not a woman that you would expect. I think that she is a massive contradiction. She’s this big powerful black woman, hard, ready to pick up a gun and shoot anyone at will. I’m fascinated in exploring her psychology, just put it that way. And I’m excited to pick up a gun.”

Latino Review describes Waller as “a former congressional aide and government agent who is often placed in charge of the Suicide Squad, a semi-secret government-run group of former super villains working in return for amnesty.”

Sources cautioned that Davis’ schedule is tricky to navigate due to her commitment to the ABC TV series “How to Get Away With Murder,” but insiders tell TheWrap that the deal is expected to close in the coming weeks. They also say that Smith has personally lobbied for Warner Bros. to do whatever it takes to cast Davis, who earned Oscar nominations for “The Help” and “Doubt,” and is up for a Golden Globe this weekend for HTGAWM.

Ayer is also writing the script for “Suicide Squad,” which is being produced by Charles Roven and Richard Suckle. Zack Snyder, Deborah Snyder, Colin Wilson and Geoff Johns are serving as executive producers.

Davis, who will soon be seen opposite Chris Hemsworth in “Blackhat,” next stars opposite Jennifer Lopez in the Sundance-bound thriller “Lila & Eve.” She’s represented by CAA and the Lasher Group.