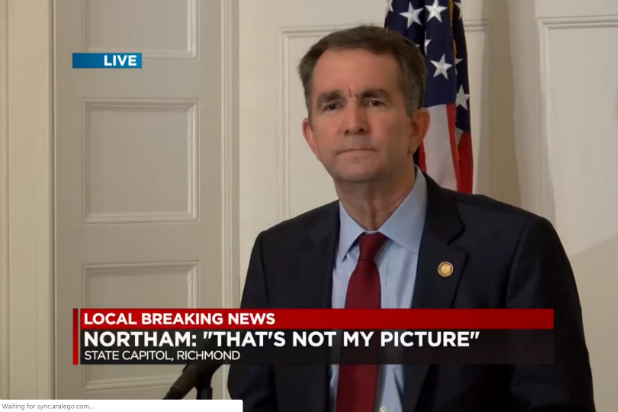 Virginia Gov. Ralph Northam said Saturday that he will not resign, despite nearly unanimous calls to do so from members of his political party, because he does not believe he is depicted in a racist photo from his medical school yearbook page.

While Northam says he stands by the intent of his apology on Friday, in which he said photo did depict him, he now says that he had never seen the photo before his staff showed it to him.

“I believe then and now that I am not either of the people in that photo,” Northam said during a press conference Saturday. “I stand by my statement of apology to the many Virginians who were hurt. It was disgusting, offensive, racist.”

The photo, which depicts two men in racist costumes — one in blackface, and the other dressed as a member of the Ku Klux Klan — was included on Northam’s 1984 Eastern Virginia Medical School yearbook page. It was first made public by the conservative website Big League Politics on Friday.

Northam said that the reason he initially took responsibility for the photo is because it tracked with other incidents in his past, and because, he said, it was a different time. “In the place and time where I grew up, many actions that we rightfully recognize as abhorrent today were commonplace,” he said. “My belief that I did not wear that costume… stems in part from my clear memory of other mistakes I made in this same period of my life.”

One of those mistakes, he said, was his participation in a 1984 dance contest in which he put shoe polish on his face as part of a Michael Jackson costume. “I look back now and I regret that I did not understand the harmful legacy of an action like that. It is because my memory of that is so vivid, that I truly do not believe that I am in the picture in the yearbook.”

Northam later added that “I actually won the contest because I had learned how to do the moonwalk.” However, when asked if he was still able to moonwalk, Northam replied “my wife says inapproptiate.”

Northam said however that other classmates from medical school have told him there are “numerous” examples of photos having been assigned to the wrong yearbook profiles, and that he believes this happened to him. He also said his page does contain other photos that he submitted, and that it was his responsibility “to recognize and prevent” the racist photo from being added.

Northam also said he never purchased that yearbook, but he is currently trying to obtain a copy and will “continue to gather evidence in the coming days.”

“Today I am not ready to ask Virginians to grant me forgiveness for my past actions. I also do not fully expect that they will immediately believe my account of these events. Right now, I am simply asking for the opportunity to demonstrate beyond a shadow of a doubt that the person I was is not the man I am today.”

Resigning, Northam continued, would be the easy way out, sparing him of “the difficult path” of having an honest conversation about racism and his past. instead, he says he will remain in office “as long as I believe I can effectively fulfill that task, I intend to continue doing the business of Virginia.”

He did allow that if it gets to the point that “we’re not effective… then we will revisit this and make decisions.”