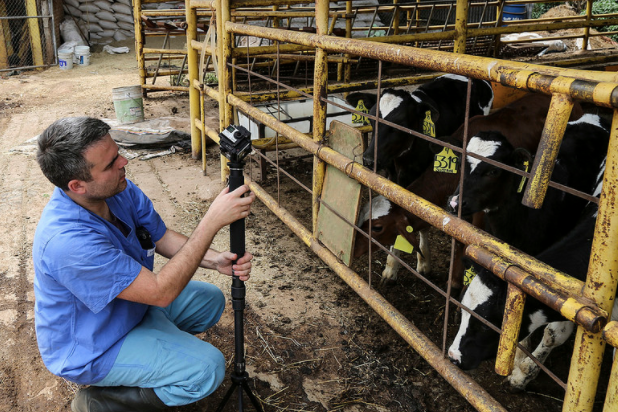 Animal-rights groups are turning to virtual reality to shine a light on the suffering and mistreatment of farm animals.

Animal Equality, an advocate group with 60 workers spread across eight countries, is at the forefront of using VR to expose the meat industry. The group released its third VR film, “iAnimal,” on Thursday, which highlights the gruesome conditions at dairy farms in England, Germany and Mexico. Viewers follow the life cycle of cows, from milking to living in remarkably cramped spaces and, ultimately, their slaughter.

In an interview with TheWrap, Animal Equality founder Jose Valle explained why shooting in VR is a more immersive and emotional experience for the viewer.

Also Read: Virtual Reality CEO: VR Does Not Spell the End for Movies

“If you don’t like what you’re seeing in front of you and you want to look down or in another direction, you can see the blood,” said Valle. “So [VR] traps you into that scene and makes it so much more real.”

Born in Spain and now based in Los Angeles, Valle has been documenting animal abuse for three years with VR. The technology “helps people to understand the suffering of the animals,” said Valle.

The footage is jarring at times — at one point, a cow has its horns ripped off while it squirms inside a holding cell. Many of these cows will spend their entire lives solely walking on concrete.

Also Read: Why WWDC 2017 Is the Perfect Time for Apple to Reveal Its Mixed Reality Plans

The “iAnimal” series — with the latest edition narrated by Evanna Lynch of “Harry Potter” fame — has been viewed by more than 60 million people, according to the group. Animal Equality has set up VR demos at universities and at the Glastonbury music festival in Britain to reach a wider audience.

Beyond its release on YouTube, “iAnimal” can be viewed on Samsung Gear VR. Animal Equality is also developing an app to bring the series to all major VR headsets.

By placing viewers inside the cage with the animals, Valle is hoping VR will convey the misery of many dairy farms. “You feel trapped, just as the animals are.”