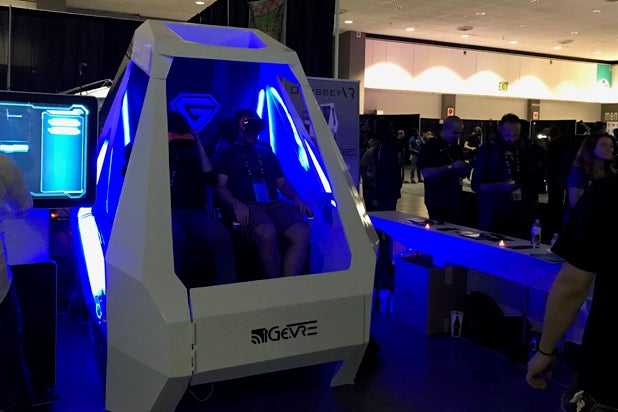 Gil Baron, the co-founder and CEO of virtual reality company Mindshow, likes to talk about the “VR smile.” It’s what happens when someone puts on a VR headset for the first time and almost immediately breaks out into an ear-to-ear grin, which remains plastered on his or her face well after the experience is over.

But as the VR industry matures, its backers and enthusiasts won’t be satisfied with sparking joy and wonder alone. If it’s going to fulfill its potential as a new platform to experience content of all kinds, virtual reality is going to have to embrace creators who may not come to the table with high-level programming skills, but may have the next “Seinfeld” or “Game of Thrones” in their heads. VR’s 360-degree, all-encompassing canvas can be intimidating to aspiring content makers and interested parties who want to embrace the technology — but aren’t necessarily sure where to start.

At last week’s VRLA expo in Los Angeles, plenty of companies were actively looking to bridge that gap, hoping to inspire the next generation of creators — whether they’re film directors, musicians or architects — to potentially put down their traditional equipment and pick up a headset and VR camera. That’s what Mindshow is trying to do.

“We want VR to be for everyone — no barrier to entry,” Baron told TheWrap.

TheWrap stepped into the fully-enclosed Mindshow booth (so as not to feel self-conscious in front of a crowd) and within minutes, had recorded a scene centered around an argument with a doctor standing on the wing of an airplane — all while in the body of an alien that perfectly replicated TheWrap’s posture and hand gestures. There was also a childlike thrill in looking out at a virtual landscape from the perspective of an airplane wing (but we probably shouldn’t give U.S. airlines any ideas).

Baron said the point of Mindshow is to allow content creators focus on what they do best — make engaging videos — and not spend time troubleshooting technology.

“You shouldn’t have to learn how to write code to make something,” he said.

Rikard Steiber, the senior vice president of virtual reality at HTC, which makes the Vive VR system — the consensus favorite current setup among the numerous industry insiders TheWrap spoke to at VRLA — acknowledged that the hardware still prices out too many would-be enthusiasts or just people who want to experiment. The Vive retails for $799, which doesn’t include the high-powered gaming PC necessary to run it.

“Right now it’s too expensive,” Steiber told TheWrap. “There will be much more value when the prices go down.”

One of the featured demos at HTC’s booth was MakeVR, developed in partnership with Sixense. MakeVR allows users to design, model and sculpt 3D shapes in a virtual, room-scale canvas, and export them to a CAD program or 3D printer. TheWrap strapped in and punched some custom sized holes in a virtual phone case — not exactly advanced architecture, but easy enough to figure out with just a few minutes of practice. And manipulating floating objects in MakeVR’s deep space-inspired canvas was a lot more fun than laboring over blueprints under fluorescent lights.

Riff.tvr, a game developed by Immersive Music Experiences, drops users into a virtual music video, using the HTC Vive’s hand controls to shred on an electric guitar or bang out a vigorous drum solo. Immersive Founder and CEO Tony Shiff told TheWrap he believes VR experiences like his could provide another avenue to monetize music, as users could discover and buy catalogs of songs to play along with in the game. And the data their gameplay provides could be valuable to the music business.

“You get analytics back,” Shiff said. “You know what people are playing — and not playing.”

John Hamilton, a former movie producer and distributor who is the CEO and founder of VR firm UNLTD, told TheWrap he was “blown away” the first time he experienced virtual reality, and decided to drop everything else to focus on the nascent platform.

Coming from the content side, Hamilton said VR’s biggest problem at this point is that the technology is still clumsy — literally — as users have to choose between slower, less-powerful smartphone-centric systems or watch out for loose wires on more expensive PC-based rigs. High-end VR setups like the Vive and Facebook’s Oculus Rift use a wired connection to link the headset, hand controls and computer — something another exec lamented as well.

“We need to get rid of the wires,” Frank Soqui, the general manager of VR and gaming at Intel, told TheWrap.

To that end, Intel is developing Project Alloy, a headset with incorporated cameras and a battery pack that allows it to be used wire-free — a different kind of cord-cutting.

And while gaming companies and Hollywood are at the forefront of virtual reality at this point, Soqui said there are plenty of other industries that are also starting to get plugged in. He said sports leagues are interested — he mentioned the NFL as one of them — as well as businesses in everything from real estate to medicine.

“The dark horse here is what’s going on in corporate and enterprise,” Soqui said.

When asked what to expect at future virtual reality gatherings, Soqui said to expect a proliferation of higher-quality VR content to emerge. What that looks like, he can’t say — but that’s a sign of a maturing industry with a diversifying base of creators.

“There will be more and more content getting developed,” he said. “And more surprises.”