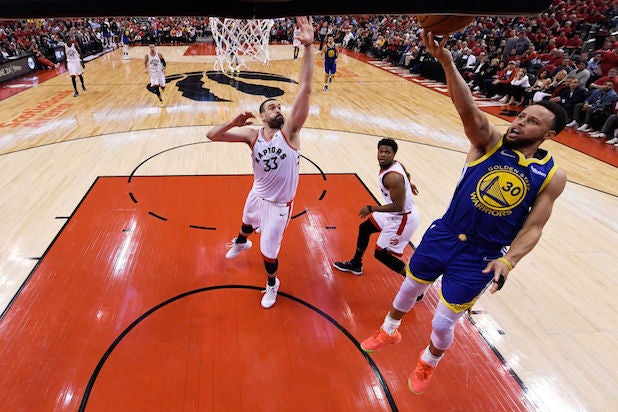 Virtual Reality and the NBA Finals Are a ‘Match Made in Heaven,’ NextVR’s Content VP Says

“There’s 7 billion people on the planet who can’t get to an NBA finals game, but we can take you there in virtual reality,” Danny Keens says

Looking to relive the Golden State Warriors’ thrilling game 2 win in the NBA Finals from Sunday night? NextVR wants you to do it in virtual reality.

“There’s 7 billion people on the planet who can’t get to an NBA Finals game, but we can take you there in virtual reality,” NextVR VP of Content Danny Keens said, which extended its annual contract for 25 NBA games to put viewers in a seat “money can’t buy” right underneath the hoop for the Warriors faceoff with the Toronto Raptors.

“What’s great about it is you get the sense you’ve been teleported into an NBA Finals game, even if you’re on the other side of the planet,” he said, noting that the 10-minute highlight packages are available soon after each game wraps up — giving the audience a chance to watch Andre Iguodala’s clutch three-pointer with seconds remaining on the clock as if they were standing on the court themselves.

In addition to content from the NBA, NHL and Wimbledon, the Orange County, California-based company is looking to reinvent watching concerts from your couch, bringing viewers inside Live Nation concerts from artists like ASAP Ferg to Imagine Dragons. And for the last year, NextVR has broadcast a live show from New York’s iconic Gotham Comedy Club. For NextVR, live is the key word. It wants to make the viewer feel as if they’re not only watching a performance, but there in the audience.

We talked to Keens recently about the challenges of shooting in VR, why the company has leaned into live events, and where VR is headed in the next few years. You can also listen to Keens at TheWrap’s TheGrill conference this Wednesday when he joins our Silicon Beach Roundtable.

What does a viewer get by watching in VR rather than the old school way on their flatscreen TV? What are some of the benefits that come with watching in VR?

The NBA and VR is a match made in heaven. Watching sports in VR is light years ahead of the regular flatscreen experience. That’s because you’re actually stepping into the TV for the first time. You’re no longer just staring at a screen, you’re sort of stepping into the screen. VR unlocks the screen in a way that traditional media has never been able to do. It breaks down these walls like never before. Sports broadcasting to me has always been about meeting the demands of the fan, and I truly believe VR has the ability to meet those demands like no other medium in history. We’re not talking about incremental change, we’re talking about transformational change.

We can now bring audiences closer to the action than ever before. Our mission with the NBA has always been to provide fans with this sort of unprecedented first-time access, and that’s what were sort of doing in VR. Fans are going to feel inches from the action as they see the plays and highlights from all of these vantage points, and they’re going to get something they just can’t get with traditional television.

Once you’ve experienced it, you can never really go back and watch sports on a traditional flatscreen without thinking about VR.

How difficult is it to capture the essence of a game or concert and make it seem like the viewer is there in person?

You want people with a headset on to really looking at content and experiencing these highlight packages and feel sort of immersed in an NBA arena.

That means we’ve had to put cameras in locations that the NBA isn’t traditionally used to. And one of the great things about working with the NBA is they’re very forward-thinking on this stuff. So we have a camera that sits on the scorer’s table, and this is once again a seat that money can’t buy.  But it’s a position that traditionally has never had a camera on it, and now they allow us to have a camera there. When you watch one of our highlights, it feels like you’re sitting court-side at an NBA game.

Of course, the other positions are putting the cameras underneath the basket, which isn’t a traditional seat or even a traditional spot for a TV camera. And that combination of camera positions allows us to create really compelling content.

Also Read: More Americans Say Streaming Has Hit 'Saturation Point': So How Can Disney and Others Take on Netflix?

NextVR has very much leaned into live entertainment. Why does VR lend itself well to these experiences?

Creating a sense of presence and immersion — that’s really at the heart of what we really think about great content. The stuff that I’ve spent a lot of time focusing on is because the use cases are so applicable to VR. The concept that we can teleport you inside an NBA arena or to the front row at  a Live Nation concert while you’re sitting at home on your couch, those moments will change how people consume sporting events or live music events, mainly because those arenas ultimately can only have certain capacity, and many times the capacity, the seats aren’t actually that compelling. You’re in the rafters, you’re sitting back row at Staples Center or Oracle Arena, or you’re in the last couple of rows at a concert and the experience isn’t quite as compelling as you want it to be. And what we can do in VR is essentially give anyone in the world a front row seat to a live sporting or music event at a greatly reduced price — if not free — and give them the experience of sitting in the front row.

What kind of entertainment is going to be most impacted by VR over the next five years?

I strongly believe the future will be the bigger the entertainment and consumer brands will be playing in VR. We’re just at the very beginning of what will happen to the industry. I think of it like the the original brick cellphone. The same thing with mobile phones and other technologies, VR is only going to get better, the form factors are only going to get better, the resolutions are only going to get better. There’s been an incredible momentum around VR, but it’s only a start. I think the next two years we’ll see an incredible growth in adoption of VR. A new collection of mobile phones that will enable the powering of devices through 5G technology, and as this 5G rollout happens with all the telcos we’ll see even bigger adoption of VR hardware and I think we’re really looking at a two-year runway for mass adoption.