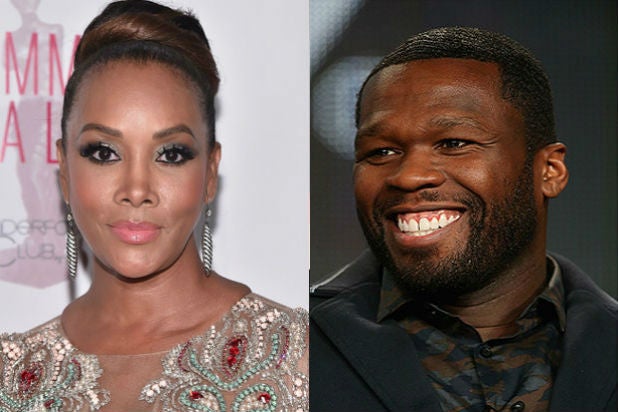 Vivica A. Fox raised some questions about ex-boyfriend Curtis “50 Cent” Jackson’s sexuality on Sunday’s episode of “Watch What Happens Live.”

Host Andy Cohen asked Fox about Jackson sharing a blog post saying that the season two ratings of “Empire” dipped because of too much “gay stuff.” Fox replied, “First of all, you know the pot called the kettle black is all I’m saying.”

When pressed to elaborate on the question, Fox said that Jackson, who stars on and produces rival “Empire” show “Power,” is not gay. “We had a great time,” she said. “He just seems like he’s got something that’s not quite clear.” She also said a magazine cover featuring Jackson and fellow rapper Soulja Boy didn’t help matters.

Fox, who will guest star on an upcoming episode of “Empire,” subsequently tweeted “Boom!! That’s was 4 my #EmpireSeason2 family yall!! Drops mic 😉 #WWHL”

Jackson and Soulja Boy responded almost immediately with a series of scathing posts on their respective Instagram accounts. Soulja shared an unflattering photo of Fox along with the caption “Everybody hit up this cougar..she’s single & ready to mingle …1-800-GrannyDesperateForAttention extension I’mWashedUp.”

Jackson shared the same photo, along with the caption, “Oh No!!! Now she thinks I’m gay because I let her lick my Ass. LMAO. Wait,I didn’t want her to, she forced me, my hands were tied. 50 shades of grey.”

Jackson posted several more images of Fox, including one with the caption, “Bitch remember when you told me f–k Halle Berry and you could have played all the roles she did better then her? And I just looked at you  like what the f–k kind shit did you take? LMAO.”

bitch remember when you told me fuck Halle Berry and you could have played all the roles she did better then her? And I just looked at you ???? like what the fuck kind ????shit did you take?LMAO. #EFFENVODKA #FRIGO #SMSAUDIO