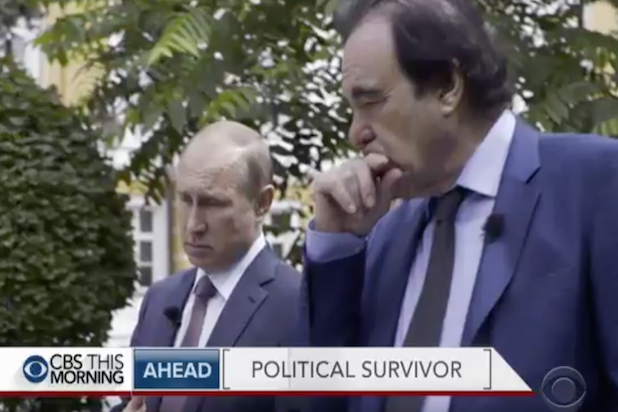 Filmmaker Oliver Stone and Russian President Vladimir Putin have an in-depth conversation about assassination attempts during a preview of Showtime’s “The Putin Interviews” that aired on “CBS This Morning” Thursday.

In the clip, Stone brings up the multiple assassination attempts that have been made against Putin — the Russian president said he’s still alive because he trusts his security.

“Three times president, five assassination attempts, I’m told. Not as much as [Fidel] Castro, who I’ve interviewed. I think he must have had about 50. But there’s a legitimate five I’ve heard about,” Stone says.

“Yes, I talked with Castro about that,” Putin tells Stone. “And he said to me, ‘Do you know why I’m still alive?’ I asked him, ‘Why?’ ‘Because I was always the one to deal with my security personally.’ But yeah, I do my job. And the security officers do theirs and they are still performing quite successfully.”

“In other words, you trust your security, and they’ve done a great job,” Stone says.

“I trust them,” Putin responds.

Also Read: Putin Denies Election Hacking: 'We Never Engaged in That on a State Level'

Stone then explains that “the first mode of assassination” is to “get inside the security.”

“I know that,” says Putin. “Do you know what they say among the Russian people? They say that those who are destined to be hanged are not going to drown.”

This is a project Stone has been working on for two years, traveling to Moscow and Sochi more than a dozen times to speak with Putin.

Showtime and Stone are promising a wide range of topics during the four-part series, including Putin discussing his relationship with and views on every U.S. President of the past quarter-century, as well as his thoughts on the legacies of Stalin, Gorbachev and Reagan. He will also talk about Russia’s aggressive tactics in Syria and Ukraine, as well as Edward Snowden’s flight to asylum in Moscow.

“The Putin Interviews” is produced by Fernando Sulichin, who previously worked with Stone on “The Untold History of the United States” and “Snowden.” Stone is expected to appear on “CBS This Morning” to discuss the series on June 12, the day it debuts on Showtime.