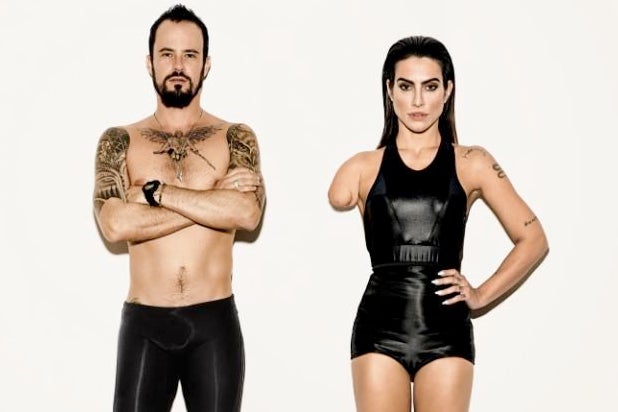 Vogue Brazil has come under fire for a spread in its September issue to commemorate the beginning of the Paralympic Games in Rio.

The spread features two actors, Cleo Pires and Paulo Vilhena, who appear to have disabilities — Pires has her right arm amputated, and Vilhena displays a prosthetic leg. The problem is, the disabilities are mere Photoshop illusions — both Pires and Vilhena are able-bodied.

In the spread, the models are also pictured with two Paralympic athletes whose disabilities they were digitally altered to resemble — table tennis player Bruna Alexandre, who has an amputated arm, and sitting volleyball player Renato Leite, with a prosthetic leg.

Done with the support of the Brazilian Paralympics Committee and the athletes themselves, the spread was created “to attract visibility to the Special Olympics and highlight the relevance of Brazilian disabled athletes in the panorama of the national sport,” according to the magazine’s Instagram.

The campaign was implemented because reportedly only 20 percent of tickets to the Paralympic Games, which take place Sept. 7-18 in Rio, have been sold.

However, the well-meaning campaign has drawn ire from those who feel that actually disabled models — perhaps like the athletes in question — should have been given the opportunity and the space to model in the shoot themselves.

“There’s no shortage of disabled people to take the place of spokesperson in these adverts and show society that yes, they exist and they deserve as much space in the media as us,” said feminist writer Natália Belizario, according to The Telegraph.

Disabilities charity Scope spokesperson Richard Lane told Huffington Post UK that it was “hard to understand why Vogue Brazil felt the need to use models who aren’t disabled in a Paralympic photoshoot. The magazine has missed the perfect opportunity to celebrate Brazil’s talented Paralympians as sporting equals. It’s so rare to see positive and powerful representations of disabled people in the media.”

The backlash has gotten to and is not sitting well with Pires, who came up with the idea for the shoot along with creative agency Africa.

The actress took to her Instagram to defend the shoot, saying in a video, according to the Telegraph: “We lent our image to generate visibility. And that’s what we’re doing. My God.”

Also Read: Rio Olympics Are Over, So Where Will the Refugee Athletes Go Now?

Conde Nast did not immediately respond to TheWrap’s requests for comment.