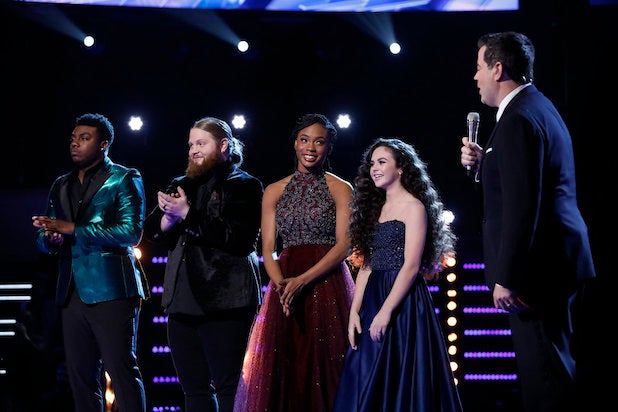 NBC crowned a champion on Tuesday’s Season 15 finale of “The Voice,” and the network earned another win of its own in the process. The net was the top-rated and most-watched channel on TV last night, though it really didn’t have any competition on broadcast.

As a matter of fact, every other show on the English-language broadcast nets was a rerun last night. That is unless you consider The CW’s “Greatest Holiday Commercials Countdown” special an original telecast. Doesn’t matter: That and the repeats on CBS, ABC and Fox all settled way behind NBC’s primetime Nielsen averages.

It wasn’t all good news for NBC, however: “The Voice” dropped 15 percent in ratings from last December’s finale, which had already sunk 20 percent versus the winter of 2016. At least this one was up again from the singing competition’s Spring 2018 season finale.

NBC was first in ratings with a 1.6 rating/7 share in the advertiser-coveted 18-49 demographic and in total viewers with an average of 9 million, according to preliminary numbers. A “Voice” recap show at 8 p.m. put up a 1.2/6 and 7.2 million viewers. The two-hour live finale starting at 9 posted a 1.7/8 and 9.8 million viewers. That overall audience tally is down 10 percent from last winter’s season-ending episode.

Univision and Telemundo tied for fourth in ratings, both with a 0.4/2. Univision was fifth in total viewers with 1.3 million, Telemundo was sixth with 1.1 million.

Fox was sixth in ratings with a 0.3/2 and fourth in viewers with 1.4 million.

The CW was seventh in ratings with a 0.2/1 and in viewers with 974,000. The commercials countdown was the only show on CW’s schedule, averaging those numbers.