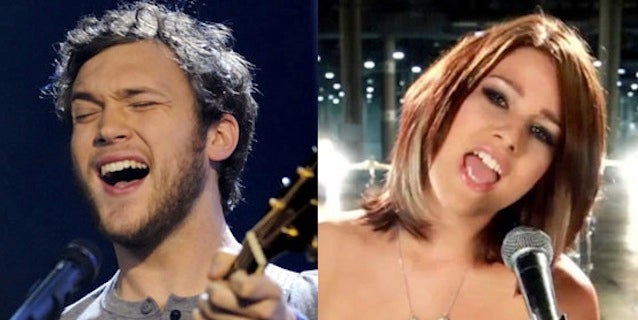 When NBC's singing competition "The Voice" returns for its fourth cycle on Monday, it will no doubt deliver plenty of talented hopefuls. And if history is any indication, it will deliver a welcome ratings boost for the network.

But will it deliver any breakout stars?

"The Voice" has been an unqualified success right from its April 2011 premiere, besting popular veteran series "Dancing With the Stars" and "Glee." In 2011-12, it even came close to tying "American Idol" for the most popular non-sports show on TV.

As a launching pad to stardom for its contestants, though, it hasn't fared as well.

Ironically, even with "Idol" plummeting in the ratings (its Wednesday performance shows have hit lows for the past four consecutive weeks, on top of a longer-term, season-to-season decline) and drawing punchlines with its revolving-door judges' panel and increasingly suspicious "controversies," the show is still managing to perform its ostensible goal: discovering new talent. As recently as last season — when the show was labored under the burden of the Steven Tyler-Jennifer Lopez sideshow — "Idol" yielded a breakout hit in the form of season winner Phillip Phillips (pictured, left — and above, with "The Voice" season 3 winner, the far lesser known Cassadee Pope).

Phillips' debut album "The World From the Side of the Moon," debuted at No. 4 in November, with 169,000 sales in its first week. (Granted, Phillips got a considerable boost when his single "Home" featured during NBC's coverage of the 2012 Olympics. Maybe the network would have been better off picking one of the "Voice" contestant's offerings.)

Also read: 'The Voice' Ratings: Are Viewers Sung Out?

"The Voice" continues to give "Idol" a run for its money in ratings. The Monday night episodes of the show in its most recent season averaged a  5.2 rating in the all-important 18-49 demographic during its most recent season in the fall. That's well within striking distance of "Idol," which as of last week was averaging a 5.4 rating with its Wednesday editions this season.

Ultimately, NBC and "The Voice" probably aren't losing sleep over their contestants' lackluster chart showings. While finding the next Kelly Clarkson or Carrie Underwood would be a nice bonus, the network's primary goal with "The Voice" is to generate ratings, and thus revenue. And that it's definitely done. Also read: NBC's Broad Comedies and Broadway Haven't Worked — But Here's What Might

Still, that hasn't translated to success for the musical-industry hopefuls vying for the top spot on the show. How many people can even name the winners of "The Voice"?

Compare the first three seasons of "The Voice" to those of "Idol" — which, by the same stage, had spawned the careers of Clarkson (pictured, above), Ruben Studdard, Clay Aiken and Jennifer Hudson.

A similar list for "The Voice" would leave anyone pretty speechless, but not in a good way.

Yes, one could argue — correctly, even — that "The Voice" is a young show. ("The Voice" doubled down on cycles last year, so the run-up to Cycle 4 has been accelerated.) And only a handful of contestants have had an opportunity to release albums since appearing on the show.

But of those who have, the track record hasn't been impressive. Season 1 winner Javier Colon released his album "Come Through for You" in November 2011 after winning the competition — and watched as it stalled out at #134 on the Billboard 200 chart. (As of December 2012, the album had sold 45,000 copies.) Colon later parted ways with Universal Republic, the partner label of "The Voice," citing a lack of support.

"I went into it with high hopes, as I believe everyone did," Colon (left) said following the split. "But when you pour your heart and soul into a new album that you think is really great, and your label who is supposed to support, market and promote your music does neither, it's really hard not to be upset. The truth is, we are all better off going our separate ways."

Season 1 runner-up Dia Frampton did slightly better with her December 2011 release "Red" (also through Universal Republic), though it failed to crack the Top 100.

Season 1 contestant Xenia met a fate similar to Colon's, parting ways with Universal Republic after releasing an EP. And Season 1 contestant Vicci Martinez hasn't swept the music industry off its feet, despite enlisting the aid of her "Voice" coach, Cee Lo Green, on her 2012 single "Afraid to Sleep." And Season 2 contestant Chris Mann's 2012 album "Roads" topped out at No. 172 on the Billboard 200.

Not a particularly auspicious beginning. Particularly considering that "Thankful," Clarkson's first album after winning "Idol," debuted at No. 1 on the Billboard 200, selling nearly 300,000 copies in its first week.

To be fair, the music industry has seen rough times in the decade since Clarkson's debut album was released. The internet has provided numerous new avenues for listening to music without actually having to buy it. Total album sales plunged from 656 million units in 2003 to a little over 330 million in 2011 — and that was actually up from 2010.

The digital innovations of the past 10 years have had a second impact on the star-making machinery that "American Idol" and "The Voice" deal in. Twitter, YouTube and Facebook have all given musical artists new ways of being discovered (we're looking in your direction, Carly Rae Jepsen) — and, arguably, diluted the necessity of shows like "The Voice" and "Idol."

"When you go back to 2002 when Kelly Clarkson won, she didn't have some of the platforms to get that talent known," notes Brad Adgate, senior vice president, director of research at Horizon Media, says. "It's more of a level playing field now."

The lack of breakthrough certainly hasn't been lost on the show's personalities. Coach Adam Levine acknowledged the situation at the Television Critics Association press tour in January, lamenting, "We can't control everything that happens in the record industry. You got to set it free at a certain point. You can't be there for every step of the way. I would like to see people be as successful as possible."

Host Carson Daly chimed in, "[The Season 1 contestants'] albums are arguably better than those in the top 50, so it's all perspective."

But if the albums are better than those in the Top 50, why have they failed to reach it?

There's no accounting for taste, but maybe it's a matter of the show's perspective. Where "American Idol" subjects contestants to judges, "The Voice" gives them coaches and mentors — an important distinction that seems better suited to preparing them for a music career in the long run.

"The show offers people the opportunity to get mentored, not just judged. It doesn't just say, 'Be less pitchy.' It says, 'Right here is where you are pitchy,'" "Pieces of You" singer Jewel, who's served as a mentor on "The Voice," has said. (It's) fixing the actual problem instead of just giving them a critique and expecting them to know what to do to fix it." Which might not create the kind of "Idol"-esque drama that causes viewers to embrace their favorite singers defensively. The nurturing approach could, however, pay off for the artists in the long run — and help them in ways that "Idol" has often failed its own spawn. For all of "Idol"'s  success in creating music sensations, staying power isn't always their strong point.

Yes, "idol" alums such as Clarkson, Underwood, Jennifer Hudson, Katharine McPhee and even Broadway star Constantine Maroulis have gone on to enjoy enduring careers. But just ask Studdard, Aiken, Kris Allen, Taylor Hicks and other members of the Where Are They Now Hall of Fame what the other side of the coin looks like.

And then, the makeup of the coaches' roster might take away some of the contestants' thunder.

"The Voice," despite the Minaj-Carey rivalry, relies more heavily than "Idol" on the funny back-and-forth jibes between the coaches. And unlike "Idol," whose judges' panel has tended to be occupied by comeback-trail wanderers like Paula Abdul and Jennifer Lopez, the "Voice" coaches still very much have viable music careers.

It could even be argued that Cee Lo Green, Christina Aguilera, Adam Levine and Blake Shelton's on-air shenanigans soak up the spotlight to the contestants' detriment.

"The Voice" has provided a few career boosts to the coaches. Shelton scored his first No. 1 album, "Red River Blue," after joining "The Voice." Levine has parlayed his stint into a budding acting career, with a run on the FX drama "American Horror Story" and a role in the upcoming film "Can a Song Save Your Life?" (which Green also appears in).

And Aguilera and Green are in such demand lately that they're sitting this season out to fulfill other commitments. (They're being replaced by Usher and Shakira for this cycle.)

As Adgate points out, the problem of contestants being overshadowed by cast members is a plight common to both "Idol" and "The Voice."

"I think the judges are the stars of the show. The judges, they're the ones who are there week in, week out … singers come and go," Adgate notes. "I don't think that it's that much of a coincidence that the only time 'Idol' improved in ratings since season 5 (is when they brought Steven Tyler and Jennifer Lopez aboard for season 10)."

The show just might produce a breakout sensation yet. It remains to be seen what the next crop of "Voice" contestants have in store. Meanwhile, season 3 winner Cassadee Pope is recording her first album since her "Voice" victory — and having music-industry giant Irving Azoff as a manager certainly won't hurt her chances.

Maybe Pope will finally help "The Voice" hit the right note with music buyers as well as TV audiences.