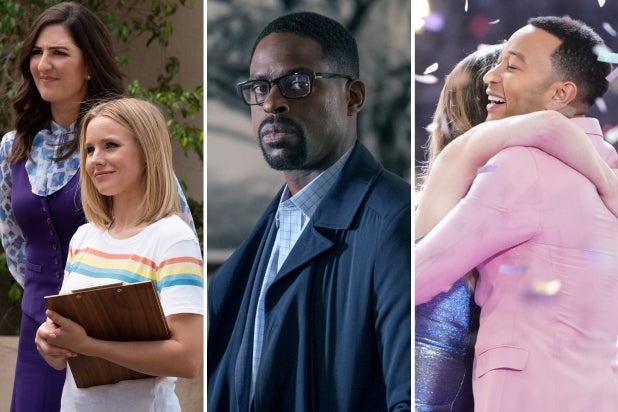 Summer technically hasn’t even started yet, but NBC just set its fall premiere dates for new shows — “Bluff City Law,” “Perfect Harmony” and “Sunnyside” — as well as returning ones, like “This Is Us,” “The Voice,” the final season of “The Good Place,” and “The Blacklist.”

Premiere dates for NBC’s new midseason series — dramas “Council of Dads,” “Lincoln” and “Zoey’s Extraordinary Playlist” and comedies “Indebted” and “The Kenan Show” — will be announced at a later date.

Below is the premiere week schedule (new shows in CAPS):

Also Read: 'The Good Place' to End After 4 Seasons on NBC

And below are NBC’s own descriptions for the trio of new series.

“BLUFF CITY LAW”
Coming from a famous Memphis family known for taking on injustice, brilliant lawyer Sydney Strait used to work at her father Elijah’s celebrated law firm until their tumultuous relationship got in the way. After barely speaking to him for years, Sydney is suddenly thrust back into the family fold when her philanthropist mother passes away unexpectedly. In the wake of her loss, hoping to reconnect with the daughter he loves, Elijah asks Sydney to rejoin his ﬁrm. She agrees because despite her lingering resentment and distrust, she knows that working alongside her father is her best hope at changing the world … if they can ever get along.

“PERFECT HARMONY”
Bradley Whitford stars in this comedy about finding inspiration in the most unlikely places. When former Princeton music professor Arthur Cochran unexpectedly stumbles into choir practice at a small-town church, he finds a group of singers that are out of tune in more ways than one. Despite the ultimate clash of sensibilities, Arthur and his newfound cohorts may just be the perfect mix of individuals to help each other reinvent and rediscover a little happiness, just when they all need it most.

Also Read: 'Abby's,' 'The Village' and 'The Enemy Within' All Canceled by NBC After One Season

“SUNNYSIDE”
Garrett Modi was living the American Dream. As the youngest New York City Councilman ever, he was rubbing elbows with the political elite, attending star-studded parties and was the pride of Queens. But instead of spending his time in ofﬁce helping the people that got him elected, he lost his way amidst the power and glamour of politics. When his downward spiral got him busted for public intoxication (and downright stupidity), it was all caught on tape and ended his career. Now, Garrett’s crashing with his sister, Mallory, and wondering where it all went wrong. That is, until he’s hired by a diverse group of hopefuls who dream of becoming American citizens and believe he can help – giving him a new sense of purpose and a chance for redemption, as long as he remembers where he came from.

“Sunnyside” is produced by Universal Television in association with Fremulon and 3 Arts Entertainment.