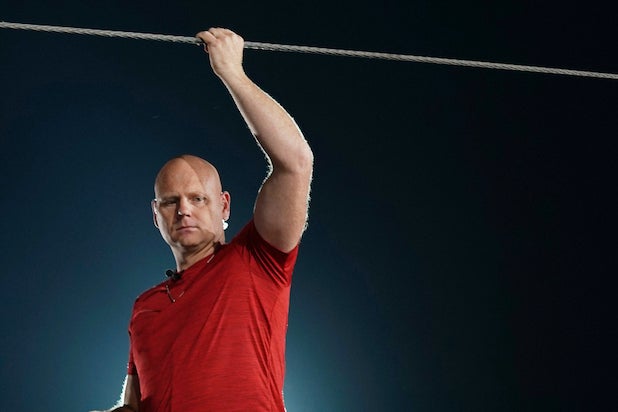 Nik Wallenda had ice water in his veins while tightrope-walking in the Ring of Fire.

Wallenda successfully completed ABC’s “Volcano Live!” walk on Wednesday night, with the 1,800-foot-long journey on a one-inch cable clocking in at 31 minutes, 21 seconds. The pace was a hair slower than the 25-30 minutes he predicted during our discussion.

The stunt’s successful completion was never really in doubt, though ABC’s harrowing music and the Masaya Volcano’s elements did their best to heighten the drama.

Also Read: Nik Wallenda Has a Huge 'Last-Minute Decision' to Make Before Walking Over an Active Volcano

Though the Nicaragua volcano sure provided a dangerous-looking setting, especially with the red lava lake far below, there were no real issues along the way. Wallenda’s harness, required by ABC, also helped mitigate the risks.

Easy for us on the ground — er, couch — to say, we know. A thermal camera helped keep track of Wallenda during the foggiest spots. Wallenda was also mic’d up and stayed in conversation with his father along the way. In the home stretch, he spoke live with hosts Chris Harrison and Sage Steele.

Wallenda elected to not wear an oxygen tank, something he told TheWrap ahead of the special would be a “last-minute decision.”

The ABC special kicked off with Wallenda’s aerialist wife Erendira performing a stunt of her own over the volcano, suspended from Nik’s wire. The original plans called for Erendira to perform the stunt while suspended from a helicopter, but that idea was altered 24 hours prior due to wind, Harrison and Steele said.

Erendira wore a gas mask for most of her performance. At a certain point, she removed the mask to hang by her teeth.

Like her husband, Erendira wore a harness at ABC’s behest.

In between the two stunts was a whole bunch of science, some interviews, and one Wallenda group prayer. The prayers continued across the wire, with Nik praising God throughout the duration.

Wallenda got pretty motivational around the 22-minute mark — that’s when he started plugging his upcoming book, “Facing Fear,” pretty hard.

“Volcano Live” was produced by Dick Clark Productions. Nik Wallenda was among the executive producers.