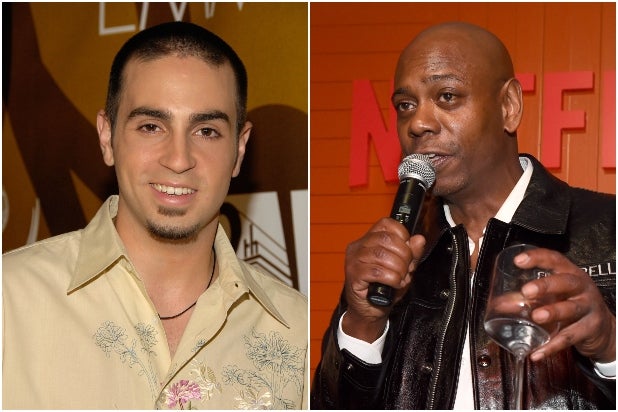 Wade Robson and James Safechuck, who accused Michael Jackson of molesting them as a children in HBO’s documentary “Leaving Neverland,” criticized Dave Chappelle on Wednesday for saying in his new Netflix stand-up special “Sticks & Stones” that he doesn’t believe Jackson abused them.

In the joke, Chappelle refers to “Leaving Neverland,” and says, “I’m gonna say something that I’m not allowed to say. But I gotta be real. I don’t believe these motherf—ers. I do not believe them.”

The special premiered Monday. By nature, comedy specials mix truth with jokes that aren’t meant to be taken seriously. But Robson and Safechuck both said they were worried that Chappelle’s routine will make victims of sexual abuse doubt people will believe them if they come forward.

Chappelle also joked that if he were a pedophile, he would have targeted Macaulay Culkin, who spent time with Jackson as child star in the ’90s, around the same time as Robson. Culkin has consistently denied that Jackson ever sexually abused him.

Here is Robson’s full statement, provided to TheWrap on Wednesday:

Whether Dave Chappelle believes I was sexually abused as a child, or not, is of no concern to me. Yet, to go on from there, in his new Netflix special, to shame victims and trivialize and condone child sexual abuse in general, especially if the abuser is a celebrity or someone in a place of power, is disgusting, irresponsible and inexcusable on the part of Dave Chappelle, and on the part of Netflix for providing him the platform with which to do so. 1 in 6 boys and 1 in 4 girls are sexually abused before the age of 18, and considering their actions, Dave Chappelle, Netflix, and the Michael Jackson Estate, who have recently supported Chappelle’s views, are part of the problem. I believe we can and should do better than this.

Safechuck said in a statement:

I’m heartbroken for all those children who look to see how they will be received when they finally find the courage to speak out about their sexual abuse. I just want to reach out to other survivors and let them know that we can’t let this type of behavior silence us. Together we are strong.

Chappelle and Netflix did not immediately respond to requests for comment.

Earlier this month, TheWrap exclusively reported a statement from Robson lamenting MTV’s decision to continue to use Jackson’s name on its annual Michael Jackson Video Vanguard Award, presented to Missy Elliott this year at the Video Music Awards.

Robson told TheWrap at the time: “I don’t personally need MTV to do one thing or the other, but as child abuse survivors all over the world watch to see whether society will support them or not if they have the courage to come forward, in that regard, it’s an unfortunate choice.”

Jackson was acquitted of child molestation in a 2005 trial involving another minor. The singer also settled another child molestation accusation in 1993. Jackson, who died in 2009, always denied any inappropriate behavior, and his family has denounced the HBO documentary.

In “Leaving Neverland,” Robson and Safechuck described in detail their accusations that Jackson repeatedly molested them and tricked their families into trusting him. Robson testified during Jackson’s 2005 trial that Jackson never abused him, but explained in the documentary that he did so in part because he believed Jackson’s life was in danger.

Robson is a well-known choreographer who traveled the world with Jackson as a child. He has worked with Britney Spears and NSYNC, among others. Safechuck was a child actor who met Jackson while filming a Pepsi commercial in the late 1980s.