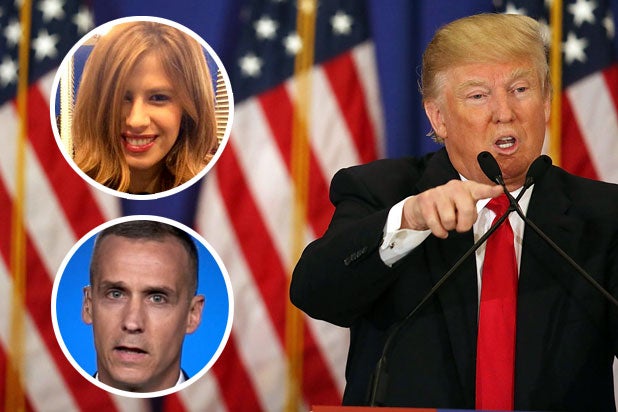 Donald Trump’s campaign manager, Corey Lewandowski, has reportedly admitted he did in fact grab a Breitbart reporter’s arm during a Trump press conference. His excuse? He didn’t know she worked for the Trump-friendly, right-leaning news outlet.

According a Daily Beast source, Lewandowski mistook Michelle Fields for “an adversarial member of the mainstream media.”

Welcome to the 2016 Republican race for the White House, where apparently roughing up a female reporter is completely acceptable if she’s not from a sympathetic media outlet.

Lewandowski is under fire for yanking Fields out of the way after the GOP candidate’s victory press conference in Florida on Tuesday night. The reporter was trying to ask Trump a question as he was leaving the press conference when Trump’s Secret Service detail began clearing the path for Republican frontrunner. That’s when Fields says she was forcibly grabbed on her arm by Lewandowski, nearly sending her to the ground.

The Trump campaign spokespersons Hope Hicks issued a statement on Thursday, saying, “The accusation, which has only been made in the media and never addressed directly with the campaign, is entirely false. As one of the dozens of individuals present as Mr. Trump exited the press conference I did not witness any encounter. In addition to our staff, which had no knowledge of said situation, not a single camera or reporter of more than 100 in attendance captured the alleged incident.”

The story has become a PR nightmare for the Trump campaign as Fields is already scheduled for an exclusive interview on ABC’s “World News Tonight” on Thursday and “Good Morning America” on Friday.

Trump’s campaign did not respond to TheWrap’s request for further comment. But on Thursday, Fields wrote a column describing the incident in her own words:

I wasn’t called upon to ask a question during the televised press conference, but afterwards Trump wandered around, stopping at every reporter to take their questions. When he approached me, I asked him about his view on an aspect of affirmative action.

Trump acknowledged the question, but before he could answer I was jolted backwards. Someone had grabbed me tightly by the arm and yanked me down. I almost fell to the ground, but was able to maintain my balance. Nonetheless, I was shaken.

The Washington Post’s Ben Terris immediately remarked that it was Trump’s campaign manager, Corey Lewandowski, who aggressively tried to pull me to the ground. I quickly turned around and saw Lewandowski and Trump exiting the building together. No apology. No explanation for why he did this.

Breitbart CEO and President Larry Solov also issued a statement saying, “It’s obviously unacceptable that someone crossed a line and made physical contact with our reporter,” adding that, “What Michelle has told us directly is that someone ‘grabbed her arm’ and while she did not see who it was, Ben Terris of The Washington Post told her that it was Corey Lewandowski. If that’s the case, Corey owes Michelle an immediate apology.”

But here’s where the story gets a bit tricky — and, according to The Daily Beast, kinda shady too. Notice that Breitbart didn’t identify Lewandowski outright, instead saying “someone” and then adding that it’s possible it might have been Lewandowski.

In its article titled, “Breitbart Rolls Over After Reporter ‘Grabbed’ by Trump Aide,” TBD says the statement was issued “in the wee hours of Wednesday morning but remains Breitbart’s official comment on the matter, hours after sources said Lewandowski acknowledged to Breitbart’s Washington political editor, Matthew Boyle, that he did manhandle Fields.”

The piece goes on to say, “The famously Trump-friendly Breitbart News” responded with a “mild rebuke in a vague statement perceived by some to be designed to protect the perpetrator.”

The story, first reported by Politico, never identified Terris as Fields’ witness. And according to TDB, it’s not by accident. Terris asked not to be identified because, as it turns out, he’d already scored an interview with Lewandowski for The Washington Post’s Style section and was planning to confront him about Tuesday night’s incident.

Coincidentally, right after Breitbart issued its statement identifying Terris as the witness in the arm-grabbing incident, the Trump campaign suddenly informed him that his interview with Lewandowski was not going to happen, citing a “scheduling conflict.” TDB then goes on to say that it left “several colleagues to believe that Breitbart had essentially given the Trump campaign manager a heads up on Terris’ intention.”

On Thursday Terris confirmed the incident occurred just as Fields described it, writing in The Washington Post: “I watched as a man with short-cropped hair and a suit grabbed her arm and yanked her out of the way. He was Corey Lewandowski, Trump’s 41-year-old campaign manager.”

Adding one more wrinkle to this story, Breitbart editor-at-large Ben Shapiro went on a Twitter rampage slamming Lewandowski. Interestingly he didn’t write about this headline-grabbing story on his own site, opting to take the fight to Twitter instead.

Maybe they just ran out of ink.

By the way, "we didn't know she was Breitbart" is an insane excuse. So you now get to assault journalists from other outlets? What the hell?

Since when is it okay for campaign managers to assault journalists? What the hell is wrong with these people?

Lewandowski should be fired. This is not about Michelle being "part of the story." It's about bad people tolerating thuggery.