“Tonight is about Crystal and Lee.”

How did Ryan Seacrest actually manage to say that with a straight face? The theme of Season 9 (other than “jumping the shark”) has been “moments.”  Well, last night’s “moments” didn’t feature our two finalists at all. With multiple montages of Simon fondling his nipples and crushing the dreams of auditioners (not to mention an awkward stand-up routine from prodigal daughter Paula Abdul), it seemed that last night was really about giving Simon Cowell a big send-off. 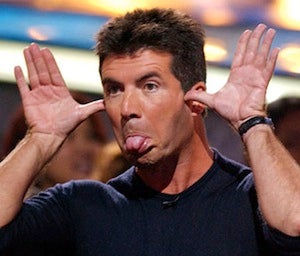 That’s not to say that it wasn’t well-deserved. I remember seeing him in the promos for Season 1 and wondering, “Who is that guy?” While the appeal of “Idol” was largely the idea that the public had the power to hand stardom to our favorite “just-like-us” performers, the real draw was the acerbic Brit who told it like it was.

There are only so many ways to say something sucks (believe me, I know after watching this season), but Simon is a virtual wellspring of inventive insults. The thing is, though, his opinions actually had merit. In his own words, he was “the one on the show, without sounding conceited, who actually knows what they’re talking about.”

Love him or hate him, he was the star of “Idol” and an era of television has ended. It kind of reminds me of when we got a new Darrin on “Bewitched.” (Shout out to Dick York!)

The most heartfelt of last night’s “moments,” even eclipsing the announcement of this year’s winner, was when all the past Idols (sans David Cook, who reportedly had a scheduling conflict), got together to sing “Together We Are One” to Simon as Paula sat in his lap. With lyrics like “See what we’ve all become; together we are one,” it was hard to keep a dry eye. And then they hit me in the gut by filing out various “Idol” losers like Justin Guarini and my boyfriend Anoop all dressed in white. Sheesh, between this and Tuesday night’s episode of “Glee,” I just might have a nervous breakdown this week!

As for the guest performances, they were a little “cruise ship entertainment” .. from 1982. I mean, seriously, “Idol,” when “Pants on the Ground” is one of your most relevant numbers, there is a problem. Siobhan and Aaron Kelly dueting with the Bee Gees to “How Deep Is Your Love” (1977)? Big Mike and Michael McDonald throwing it down on “Takin’ It to the Streets” (1976)? Or how about Lee DeWyze and a Cetera-less Chicago singing an underwhelming medley?

Sure, it totally makes sense because these acts are all so “now.” (Rolls eyes.)

Let’s not forget Alice Cooper joining the Top 12 for a rousing rendition of “School’s Out” (1972). And don’t even get me started on the Top 6 boys jamming with Hall & Oates. (What the frack?)

There were a few exceptions, of course. Season 4 winner Carrie Underwood serenaded us with “Undo It” a song that is — gasp! — currently on the radio! And last year’s winner, Kris Allen sang a song about “The Truth,” which may or may not be on the radio; I forgot he even won. Additionally, while “Every Rose Has Its Thorn” (1988) was a hit long before little Katie Stevens was even a glimmer in her father’s eye, it was made current by the appearance of everyone’s favorite comeback kid (and Apprentice!) Bret Michaels accompanying Casey James.

Also, it was nice to see Janet Jackson up and about singing “Again” with the Top 12. With a new cropped ‘do, she sang her new single “Nothing,” and has never sounded more like Michael. (RIP, MJ!) She then threw off her weird coat to reveal a weird catsuit and busted a move to “Nasty,” whose video was choreographed by none other than Paula Abdul. (See? It all comes full circle.)

The brightest spot in these musical trips down memory lane came when the girls did a mini-medley featuring Christina Aguilera’s “Beautiful” and “Fighter” (both from 2003). True, the first bit wasn’t so great, especially since we saw the “Glee” kids do an impressive version of “Beautiful” just a few weeks ago. And I was surprised they even let Paige Miles back on the “Idol” stage after that “Against All Odds” trainwreck.

But when the music transitioned into “Fighter,” that’s when it really picked up steam. It was the perfect Simon-centric song (“Made my skin a little bit thicker … So thanks for making me a fighter!”), plus Aguilera, the epitome of a pop idol, joined the girls before giving a captivating performance of “You Lost Me” from her upcoming album, “Bionic.”

When Crystal sang with her fellow granola-lover Alanis Morissette to “Ironic,” though, you had to wonder if it was foreshadowing. I mean, wouldn’t it be ironic if the best singer in the competition didn’t take home the title of American Idol? At least I think I’m using the literary device of irony correctly. Does it really matter? I know that irony doesn’t have anything to do with flies in your wine. That’s just crappy luck.

Crystal and Lee finished out the tribute to the last millennium with “A Little Help From My Friends.” I was hoping that Kevin Arnold from “The Wonder Years” would walk out but unfortunately it was just old Joe Cocker, who Crystal referred to as a living legend. Living legend, Crystal? Joe Cocker is no Bobby Knight, or, you know, Selena Gomez.

In the end, fans made “DeWyze Choice” by crowning Lee as its Idol. Yes, Crystal has been far superior vocally but she just wasn’t as likable as Lee. For me, her words to L.A.’s own Fox 11 really encapsulated her cockiness: “I think both of us are gonna be really successful and just happy. We’re gonna have the lives that we both deserve.”

It was this ego that caused her the crown. Well, that and the fact that U2’s “Beautiful Day,” no matter how played out, is just more confetti-friendly than “Up to the Mountain.”