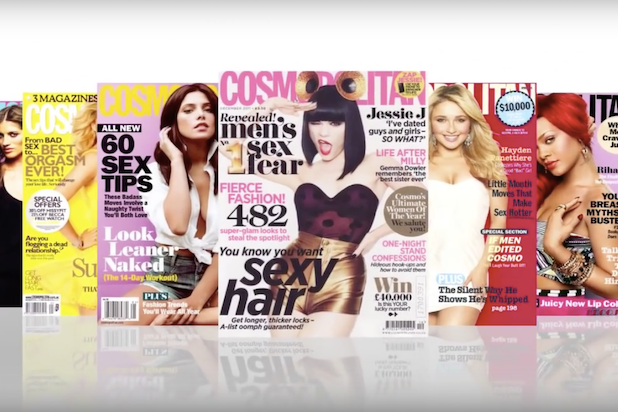 Walmart will no longer carry Cosmopolitan magazine at its checkout lines after a lobbying group voiced concerns that the content is inappropriate for shoppers. Instead, the magazine will be relegated away from checkout toward the store’s regular magazine racks.

“As with all products in our store, we continue to evaluate our assortment and make changes. Walmart will continue to offer Cosmopolitan to customers that wish to purchase the magazine, but it will no longer be located in the checkout aisles. While this was primarily a business decision, the concerns raised were heard,” the retailer told TheWrap in a statement Tuesday.

In a press release issued Tuesday, the National Center on Sexual Exploitation announced that it had successfully pressured the retailer to make the decision.

“After collaborative dialogue with NCOSE, Walmart will remove Cosmopolitan magazine from checkout lines at 5,000 stores across the country,” said the organization in a press statement Tuesday. “Protecting minors from the sexually explicit material that Cosmopolitan embodies and perpetuates has been a long-time priority of NCOSE.”

Dawn Hawkins, Executive Director at the National Center on Sexual Exploitation, said the magazine had no place in Walmart given the rising awareness surrounding #MeToo.

“Cosmo sends the same messages about female sexuality as Playboy,” she said in the release. “It places women’s value primarily on their ability to sexually satisfy a man and therefore plays into the same culture where men view and treat women as inanimate sex objects.”

Both reps for the Walmart and the magazine did not immediately respond to request for comment from TheWrap.

In a Facebook Live video Tuesday, NCOSE Vice President of Advocacy and Outreach Haley Halverson, elaborated on the evils of the magazine — which has been a longstanding target of her organization.

Victory! Walmart is Removing Cosmopolitan Magazine from the Checkout Aisles

Hate objectification? Then you'll love our latest Walmart victory! Unless you're Cosmopolitan Magazine.Learn more at: https://endsexualexploitation.org/walmart/THANK WALMART by signing this petition: https://www.oneclickpolitics.com/messages/edit?promo_id=4175

Posted by National Center on Sexual Exploitation on Tuesday, March 27, 2018