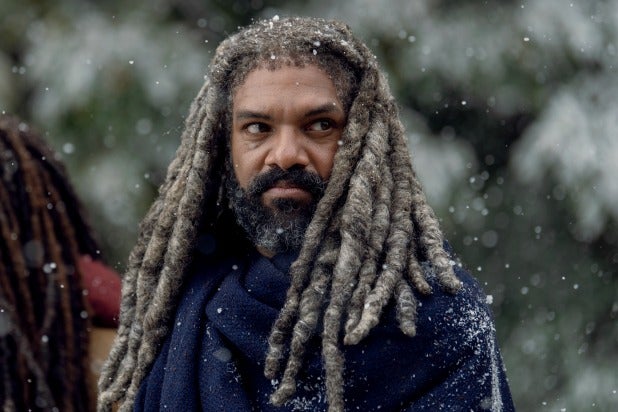 (Big spoilers ahead for season 9 finale of “The Walking Dead,” as well as potentially the future of the series)

Season 9 of “The Walking Dead” has been relatively calm by the standards of this show — at least until recent weeks. But now the Whisperers have made their big move to force a truce with Alexandria, Hilltop and the Kingdom, murdering ten protagonists characters including Tara (Alanna Masterson), Henry (Matt Lintz) and Enid. And you know that the truce will eventually break and another brutal war will begin.

And while that war goes on, the next big storyline in “The Walking Dead” will begin, judging by the mysterious voice calling out over the radio that we heard at the very end of the season 9 finale. The voice belongs to a character who will have a major impact in the future — and will lead the good guys to meet up with perhaps the most surprising new group of people our heroes have encountered on this show.

The season 9 finale focused on a rather unhappy new development — the demise of The Kingdom. All season long the Kingdom has been struggling, which was why Ezekiel (Khary Payton) and Carol (Melissa McBride) were pushing the trade fair so hard. But with Alpha (Samantha Morton) and the Whisperers using that event to kidnap several people and murder them, it looks like the fair didn’t work out so well, and that in turn led to the end of the Kingdom.

The finale episode, then, deals with the residents of the Kingdom making a trek through a blizzard to Hilltop, a trip that proves so treacherous that they’re forced to take a shortcut through Whisperer territory and risk a war. We don’t know whether the Whisperers saw them — it’s vaguely implied that Alpha did — but they did eventually get where they were going.

The episode is bookended with scenes of Ezekiel speaking over the radio, at the beginning about what happened at the Kingdom and why they had to move, and at the end of the episode having a chat with Judith about their journey to Hilltop. Then we see him step away from the table where the radio sat, only to moments later hear a new voice over the radio, a mysterious woman’s voice, asking, “Is anybody out there?”

Also Read: 'Walking Dead': We Need to Talk About Jocelyn and Michonne

We’ve got some spoilers here now for the comics and, presumably, upcoming seasons of the show. So if you don’t want to know anything about the future of “The Walking Dead,” you probably should leave now. If that’s you I’m not really sure why you’re even reading this article, honestly.

In the comics, that voice on the radio belongs to a woman named Stephanie, who befriends Eugene (Josh McDermitt) via the radio over the course of the conflict with the Whisperers before revealing that she belongs to a previously unknown group called the Commonwealth.

The Commonwealth is completely unlike any group we’ve yet seen on “The Walking Dead,” because they have an actual city of more than 50,000 people in Ohio. It’s an actual civilization, and not just an assortment of communities like the ones our heroes live in. The Commonwealth is a game changer, and very different sort of story than what we’re used to from “The Walking Dead” because it’s, so far in the books at least, more about diplomacy than war.

What’s more, there have been elements added to the TV version of “The Walking Dead” that were not in the books that we have long suspected were precursors to the Commonwealth plotline. Georgie, for example, was a big one, because she looked very similar to how the leader of the Commonwealth, Pamela Milton, is drawn in the comics. Likewise, we’ve suspected that the mysterious helicopter that took Rick (Andrew Lincoln) away early in season 9 also came from the Commonwealth, though for what purpose we still don’t know.

The Commonwealth story, then, could well bring certain odd plot threads — like Maggie (Lauren Cohan) leaving the Hilltop to travel with Georgie — back into the main story somehow. And whatever these standalone movies that will tell the rest of Rick’s story are could serve as preludes to the Commonwealth story getting going in “The Walking Dead” proper.

It will still probably we a while before the show really gets going on the Commonwealth stuff, though, just because we still have the Whisperer War to deal with, and it will likely last all through season 10. That said, the way “The Walking Dead” has possibly been sprinkling in Commonwealth stuff much earlier than expected could indicate that the beginning of that story could actually coincide with the end of the Whisperer story. Maybe folks from the Commonwealth could show up and ally with Hilltop to help end the war? Who knows.

We’ll find out someday. But for now, just know that “The Walking Dead” is definitely already planting the seeds for what comes after the Whisperers with that mysterious radio woman. And it will be very interesting to see how season 10 handles all that.