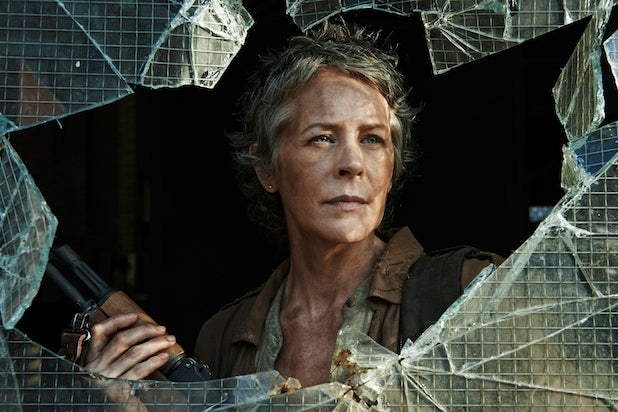 “Walking Dead” returns next month and AMC has released a select amount of first looks from Season 5.

A survivor of the initial outbreak, Carol evacuated with her abusive husband, Ed, and her daughter, Sophia, to Atlanta. They eventually joined a camp of survivors. Following the deaths of her husband and daughter, Carol formed a close bond with fellow survivor Daryl Dixon (Norman Reedus). After the death of their father, Lizzie (Brighton Sharbino) and Mika Samuels (Kyla Kenedy) looked to Carol as a parental guardian.

On Season 4, Rick (Andrew Lincoln) banished Carol. And we last saw Carol on her way to Terminus with Tyreese (Chad Coleman) and Judith. She also appeared once more in a flashback before Season 4 ended. The three, however, are not seen with the other survivors later at Terminus.

Also read: ‘Walking Dead': Here Are the Characters You Talked About Most Last Season (Update)

Is Carol still on her way there or did something happen on the journey? What will happen with her banishment?

See above for a first look at Carol on Season 5.