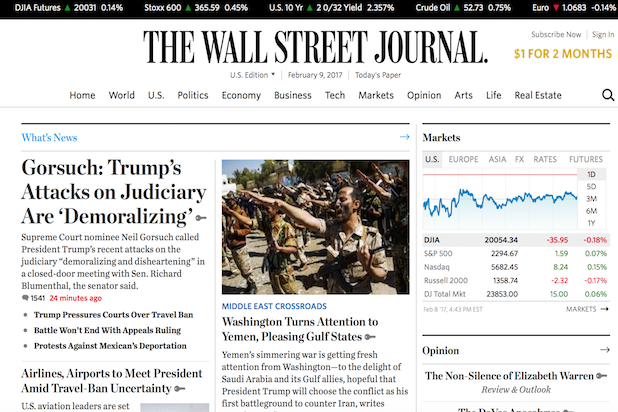 There is a lot of internal news coming out of the Wall Street Journal this week, as editor in chief Gerry Baker announced on Wednesday that he will conduct a town hall-style meeting to discuss a variety of topics, with the paper’s treatment of President Trump expected to be among the hot topics, according to Politico. This comes following news that deputy editor Rebecca Blumenstein is leaving for rival New York Times.

Some of Wall Street Journal’s female staffers gathered at a New York City bar on Wednesday night to toast to Blumenstein. According to Morning Media, the outgoing No. 2 editor delivered a speech, telling female soon-to-be former colleagues to “keep going.”

Rumors have swirled within the media industry that Journal staffers are bothered that the paper has not covered Trump as aggressively as rival papers such as the Times and Washington Post. Politico reports the situation has resulted in employees venting on a private email chain.

It was announced on Tuesday that Blumenstein, a highly respected journalist, would leave for the Times. Between Blumenstein’s exit, fear of layoffs and the internal displeasure over Trump coverage, Monday’s town hall should be quite interesting.

“[Baker] doesn’t have the support of newsroom. I’ve never worked at a place where the editor in chief didn’t have that,” an anonymous Journal editor told Politico.

The Wall Street Journal did not immediately respond to TheWrap’s request for comment.