(Spoiler alert: This story contains plot details from the 7th episode of “WandaVision.”)

At last, Wanda’s neighbor Agnes finally revealed what everyone has suspected from the start: She’s actually Agatha Harkness and, lo and behold, she’s also the force behind a lot of the more chaotic events affecting Wanda’s carefully curated sitcom reality.

But the reveal, right at the end of the 7th episode, “Breaking The Fourth Wall,” wasn’t just a standard villain speech. “WandaVision” treated viewers to a hilarious sitcom opening titles sequence complete with an extremely catchy, “The Munsters”-inspired theme song called “It Was…. All Along” that explained the whole thing and, like pretty much all of the original music the show has given us so far, was an utter delight.

And it’s even more delightful knowing that Kathryn Hahn was the one performing it. 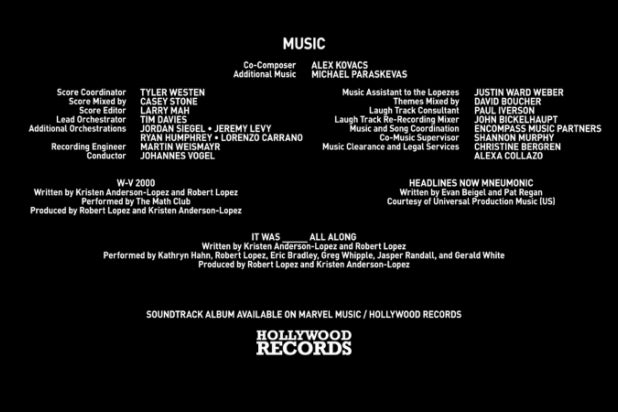 Okay, it wasn’t all Kathryn Hahn. But a screenshot during the credits confirms that Hahn was one of the people singing the theme song, along with “WandaVision” songwriter Robert Lopez, along with Eric Bradley, Greg Whipple, Jasper Randall, and Gerald White. But the refrain — “It’s been Agatha all along” — sung by a woman is definitely Hahn, since everyone else is male.

The song was accompanied with an opening credits of sorts that showed how Agatha has been orchestrating key moments throughout the show, including Pietro showing up on Wanda’s doorstep, and last week’s intense confrontation with Vision outside of town. (She even admitted she killed poor Sparky!)

Here’s that clip in case you want to relive how delightful it is:

#WandaVision Spoilers
.
.
.
.
.
.
.
I’m going to have the “It was Agatha all Along” theme stuck in my head for the rest of my days.pic.twitter.com/0or5Nc9SjL

Also Read: 'WandaVision' Might Have Finally Confirmed the MCU Multiverse

So where we go from here? Though we’ll obviously we’ll have to wait and see how this plays out, “WandaVision” certainly wants us to assume that Agatha is an antagonist. The thing is though, some of Agatha’s theme song’s lyrics, like “it’s too late to fix everything / now that everything has gone wrong / thanks to Agatha,” seem to hint that there’s something else at work here beyond her control. And remember, in the comics Agatha serves as something of a mentor for Wanda rather than her enemy, and her most destructive act — erasing Wanda’s memories, which later caused the “House of M” arc and its horrific after effects — was a well-intentioned attempt to help Wanda.

“WandaVision” has established pretty firmly that Wanda is exerting some measure of influence over Westview. She did after all purposefully expand the borders of The Hex at the end of last week’s episode. But the difficulty Wanda suddenly has keeping her sitcom reality intact, combined with the reveal of Agatha’s manipulations, makes us think something or someone else might be the real power behind this reality. If so, Agatha could just be another distraction before we get to the real villain at some point during the final two episodes.

We just hope that whatever direction Marvel chooses to go in in regards to Agatha Harnkess, it includes more of Hahn’s musical talents.