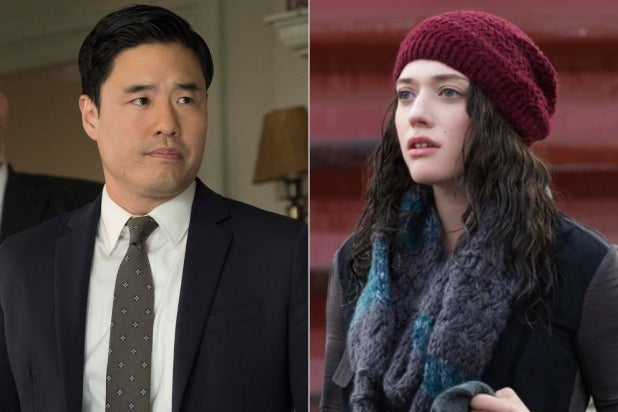 “WandaVision” will welcome two more actors from the Marvel Cinematic Universe into Westview, with Kat Dennings and Randall Park reprising their characters from “Thor” and “Ant-Man and the Wasp,” respectively, on Friday’s episode.

When TheWrap caught up with “WandaVision” head writer Jac Schaeffer, she explained why Park’s Jimmy Woo and Dennings’ Darcy Lewis were chosen to appear in the Disney+ series, despite neither having any prior history with Wanda Maximoff (Elizabeth Olsen) or Vision (Paul Bettany).

“The narrative of the show gets bigger, as we all know, and in any story you need a variety of supporting characters,” Schaeffer said. “These two, Randall and Kat, are terrific performers and they are fan favorites. And so they were suggested to me early on and I said ‘absolutely’ and set about figuring out a way to involve them into the story.”

As Marvel Studios chief Kevin Feige previously said regarding the decision to bring in “Captain Marvel’s” Monica Rambeau (Teyonah Parris), they like even their supporting players to be able to pop up frequently throughout the MCU.

Park appeared in a bit role in 2018’s “Ant-Man and the Wasp” as FBI agent Jimmy Woo, who monitors Scott Lang (Paul Rudd) while he’s under house arrest following the events of “Captain America: Civil War.” Woo actually has a more substantial comics history as a secret agent in Marvel’s “Agents of Atlas” series. An agent of S.H.I.E.L.D. (in the film he is a former agent, since that organization was disbanded following “Captain America: The Winter Soldier”), Woo for a brief time was the Avengers’ handler.

Dennings appeared as Darcy Lewis in both 2011’s “Thor” and 2013’s “Thor: The Dark World” as an ally of Chris Hemsworth’s God of Thunder. She was a political science student who was an assistant for Jane Foster (Natalie Portman) and interned for Dr. Erik Selvig (Stellan Skarsgard). By the time she returns in “WandaVision,” Dr. Lewis has become an expert in her field.

Also Read: 'WandaVision': What You Need to Know About Those Fake Commercials

Judging by a new preview of tomorrow’s episode, it looks like we’re going to see what is going on from the vantage point of Monica Rambeau (aka “Geraldine”) and the organization known as S.W.O.R.D. (which Monica appears to work for as a “captain”). As far as Park and Dennings’ characters are concerned, it seems both are working with Monica and S.W.O.R.D. to figure out just what is going on inside Westview — with Darcy closely watching the sitcom adventures of Wanda and Vision.

You can watch the “WandaVision” preview below:

Everything is about to change. Experience a new episode of @MarvelStudios' #WandaVision tomorrow on #DisneyPlus. pic.twitter.com/IGYWun00h6