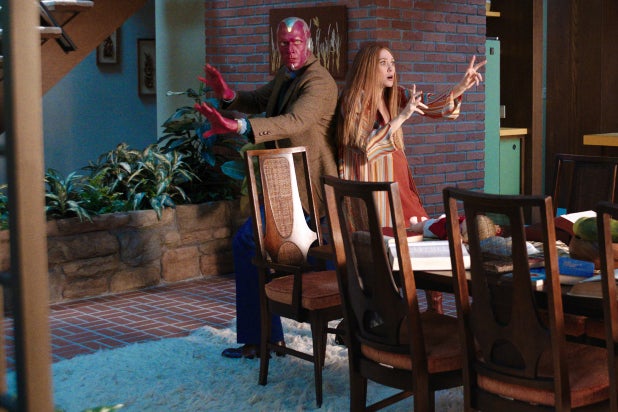 Through the first three episodes of “WandaVision,” the only thing we know for certain is that we have no idea just what the heck is going on in Marvel Studios’ first TV series.

TheWrap caught up with “WandaVision” head writer and executive producer Jac Schaeffer Monday, and while she was light on details about what is happening (hey, this is Marvel) she did promise that they’ll start to answer some of the many burning questions fans about the trippy, sitcom-inspired series.

“We will need to start answering some questions and clarifying what’s going on,” Schaeffer admits. “I don’t want to spoil it by telling you how we do it, but there are answers to be had in the upcoming episodes.”

To recap, the first handful of half-hours finds Wanda Maximoff (Elizabeth Olsen) and Vision (Paul Bettany) living in a charming, sitcom-perfect neighborhood of Westview. Of course, the problems are 1) Wanda and Vision have no memory of anything that happened before they got there and 2) Vision was very much killed dead at the end of “Avengers: Infinity War.”

Of course it’s pretty obvious by the things changed from a “The Donna Reed Show” vibe in episode 1 to a “Bewitched” pastiche for episode 2, and then literally reality warped into a full-on “The Brady Bunch” vibe for episode three — not to mention Wanda’s mysterious 24-hour pregnancy — that things are not actually as they seem. Wanda is somehow controlling this world and Vision is starting to realize something isn’t right.

And the seemingly idyllic world begin to crumble in episode 3, particularly near the end when “Geraldine” (Teyonah Parris, who we all know is really Monica Rambeau), starts asking Wanda questions about her brother, Pietro. Specifically, she brings up the fact that he was killed by the sentient AI Ultron. After briefly having a mild-looking breakdown, Wanda somehow forcibly ejects “Geraldine” from Westview entirely: Literally, she’s ejected out of what looks like an energy phenomenon into an open field where we see what looks like a military research encampment surrounding the whole thing.

Among the many fan theories that have sprang up over the first three episodes (yes, Schaeffer has read them, but sorry, she won’t tell us which ones are correct and which are way off base), is that the “twins” that Wanda gave birth to are setting up the introduction of Mephisto, one of Marvel’s biggest (and strangest) villains.

As we saw in that episode, before they knew they were having twins, Wanda and Vision had an argument about what name to go with — Vision wanted Billy and Wanda wanted Tommy. They ended up with both. It’s extremely likely that they will end up being Billy Kaplan and Tommy Shepherd.

Also Read: 'WandaVision': What You Need to Know About Those Fake Commercials

Tommy and Billy were created by Allen Heinberg and Jim Cheung. They originally debuted in the 2005/2006 “Young Avengers” comic series but their origin story stretches back to the 1980’s, when they were born. As Vision is an android with no way to father children, Wanda magically created twin sons — whose souls were unknowingly made from the demon Mephisto. When Mephisto’s soul becomes intact once again, Tommy and Billy disappear. And to preserve her sanity, Wanda’s witch mentor Agatha Harkness makes Wanda forget she ever had children. (Something that doesn’t quite work out.)

It remains to be seen how the twins will fit into “WandaVision,” whether they’ll stay a part of the series or go the route of the comics, disappearing only to reappear later on in reincarnated bodies (more on what this could all mean here).

“One of the really fun things about working at Marvel is how many comics are at our disposal. We have like binders upon binders upon binders of all of these extraordinary works of art. And, you know, we’ve taken inspiration from so many of them,” Schaeffer said about whether or not they’ll follow the kids’ kinda-insane storyline from the comics. “I can’t get specific about about the ones that we have and where things are going, but I think fans can find that texture throughout the series.”

Also Read: 'WandaVision': What's Up With Geraldine and that Sword Logo?

Speaking of Pietro, AKA Quicksilver, who was killed in 2015’s “Avengers: Age of Ultron,” Schaeffer teased we’ll learn more about Wanda’s past with her brother as the series goes along.

“The show is about Wanda and Vision and it’s an opportunity to dig deeper into who they are. And that has to do with where they come from. We’re all a product of our experiences and our trauma and our relationships. And so we will be exploring all of those details of their pasts as we move forward.”