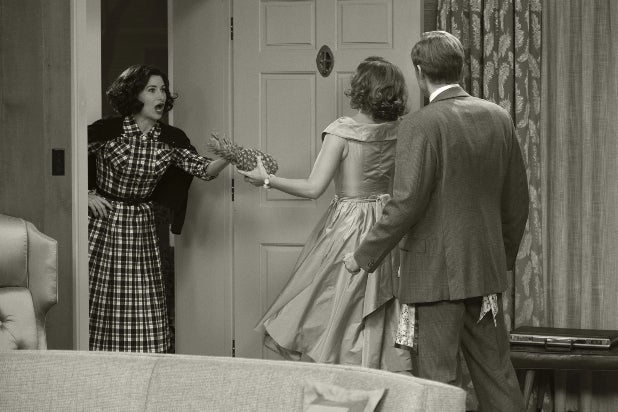 You may have heard (or read on this website) that “WandaVision,” Marvel’s Disney+ series, leaned so hard into its sitcom lovefest that it actually filmed its first episode in front of a living, breathing studio audience.

Kathryn Hahn, who is making her MCU debut as “noisy neighbor” Agnes, told TheWrap just how strange it was to have actual humans (don’t worry, these were pre-COVID days) watching them do their lines, considering it’s mostly a relic of TV past.

“It’s just different muscles,” said Hahn, whose experience with a studio audience consists of “a couple of pilots that never made it past pilot.” She continued: “I kind of come from the theater originally. It’s like, you’re not sure if you’re supposed to still play to the audience or to the camera. It’s just this weird disconnect.”

And “WandaVision” takes its homages very seriously. Not only did they bring in an actual studio audience and film it in black-and-white, but director Matt Shakman and showrunner Jac Schaeffer went to great lengths to make the dialogue era appropriate (in one moment, Agnes exclaims “Oh, this will be a gas!” — a phrase that hasn’t been uttered in probably 50 years).

“We’re all now such cynics and our comedy has such like a little bit of an anarchic edge to it. We’re all kind of used to this improvised kind of loosey-goosey school,” she said. “To have to kind of like get inside of something and find the joy in being earnest, that was unexpected for me how hard it was.”

Hahn’s Agnes is quite literally a trope from classic sitcoms brought to life. She often shows up at the worst possible moments for the love-struck pair, who are trying really hard to conceal their superheroic identities.

“It’s been around in every in every sitcom,” Hahn says of her character. “Kind of almost like a member of the family or a piece of furniture, you know, they’re they just always are around.”

Not much else has been revealed publicly about Hahn’s character, which has led to numerous fan theories about Agnes’ true nature (hey this is still a comic book show). All Hahn would say is that Agnes will be a thorn in the love-struck couple’s attempts to be normal.

“Wanda and Vision are a couple that just really, really really wants to fit in, and they are trying to conceal their true selves. And, you know, neighbors make it very impossible, nosy ones,” Hahn said.