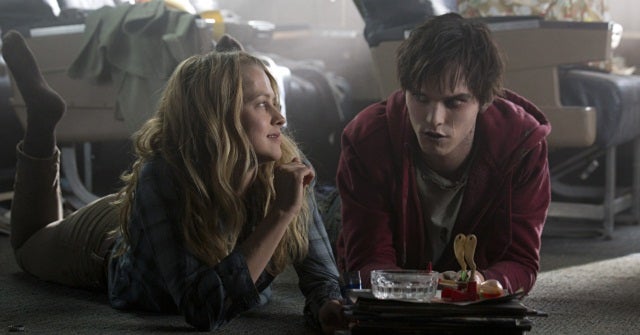 “Warm Bodies” is running away with the box office championship on Super Bowl weekend. The zombie romantic comedy targeted teens and debuted to $8.1 million Friday, which projects to a three-day total of around $20 million.

“Warm Bodies  received a “B+” CinemaScore from its young audiences and easily outpaced last week's No. 1 film, the R-rated 3D fantasy-action mash-up “Hansel and Gretel: Witch Hunters,” which took in $3.2 million Friday and is looking at a $10 million second weekend for Paramount.

Jonathan Levine (“50-50”) adapted the “Warm Bodies” screenplay from Isaac Marion's 2010 young adult novel of the same name and directs for Summit Entertainment. The story follows the zombie lad R (Nicholas Hoult) who saves Julie (Teresa Palmer) from an attack by other zombies. When their relationship takes off, it threatens to transform the lifeless world.

Sylvester Stallone's “Bullet to the Head” misfired in its debut, taking in just $1.7 million Friday for Warner Bros. That means it will struggle to get to $5 million for the weekend, and that's $2 million less than Arnold Schwarzenegger's latest, "The Last Stand," opened to in January. Even that won't be easy with its core audience of older males focused on Sunday's Super Bowl. It received a “B-” CinemaScore from first-night audiences.

Best Picture Oscar nominee “Silver Linings Playbook kept rolling, taking in $2.5 million Friday after the Weinstein Company upped its theater count by 168 to 2,809. That's a 3 percent gain from last Friday and translates to an $8 million weekend, which would be good for third place. The domestic total for "Silver Linings" is nearly $75 million.

Universal's horror thriller “Mama” was running fourth after taking in $2.7 million Friday, and is on pace for $8.4 million over the three days. Next was Best Picture Oscar nominee “Zero Dark Thirty,” which brought in $1.6 million Friday and will wind up with around $5 million for the weekend. Its overall domestic gross is at $74.1 million.

Behind “Bullet to the Head” in seventh was Film District's “Parker.” The Jason Statham action film is looking at a $3 million second weekend after bringing in $1 million Friday.

Three more Best Picture Oscar nominees filled out the top ten. Weinstein's “Django Unchained” took in $919,000 Friday and will finish the weekend at around $2.7 million after dropping 230 theaters.  Universal's “Les Miserables” and DreamWorks' “Lincoln” are running just behind and on pace for $2.4 million weekends.

Lionsgate opened the action comedy “Stand Up Guys,” which stars Al Pacino, Christopher Walken and Alan Arkin as aging con men, in 659 theaters. It took in $528,000 and is looking at $1.4 million for the weekend.

Overall, the weekend is running about 15 percent behind Super Bowl weekend last year, when the sci-fi fantasy “Chronicle” opened to $22 million and the Daniel Radcliffe horror film “Woman in Black” debuted to nearly $21 million.